Here we are again on the week of Thanksgiving. Accordingly, it’s time that we once again direct you to our 2010 Thanksgiving post entitled “Thanksgiving in 1810, 1910, and 2010.” Back then, in our early blogging days, we somehow unearthed a century old magazine article in which the writer, a resident of 1910, looked back 100 years and marveled at the incredible social and technological change that occurred in the previous ten decades. That writer also looked forward to 2010 and briefly speculated how we, as citizens of the 21st century, might look back at those who lived in his era 100 years before. That article struck such a chord with us, and it’s become a Turkey Day tradition for us. So, today, we remind you of it once again and direct you back to it 107 years after its publication. (That neat illustration above – and many others like it – comes directly from the 106 year old article.). Have a look, and let us know what you think.

As you may know, our firm, Gallivan, White, & Boyd, P.A. is very, very active in DRI. John Cuttino of our Columbia office serves as its president. Jim Dedman, the editor of this blog, currently acts as the liaison of the Product Liability Committee to the Annual Meeting, which is taking place this week! It’s the upcoming Annual Meeting we discuss today.

We are very excited for the upcoming 2017 Annual Meeting, which takes place this week in Chicago on October 4-8, 2017. Rest assured that we have planned a fun dine-around for the Product Liability Committee on the evening of Wednesday, October 4 (more about which below)!

Plus, DRI has put together a phenomenal line-up of cutting-edge CLE presentations (up to 12.0 hours) and networking events. This year’s speakers and special guests, include:

The Product Liability Committee will have itsdine-around on the evening of Wednesday, October 4. For more details, please contact Jim Dedman at jdedman@gwblawfirm.com.

The Product Liability Committee’s CLE and business meeting will take place on the afternoon of Thursday, October 5th. Here’s the information:

· Jeffrey A. Curran of GableGotwals and Kevin Schiferl of Frost Brown Todd, LLC will speak on “We’re Not in Kansas Anymore: The Challenges of Trying Cases in Unfamiliar Jurisdictions.” That program will take place on Thursday, October 5 from 3:30 to 4:30 p.m. Following the program, we will have a brief Product Liability Committee business meeting to move our agenda forward for the coming year.

We hope to see you this week!

According to this News Alert, the Clerk’s Office of the U.S. District Court for the Middle District of North Carolina has posted some electronic filing tips for ECF users. You can read the new handout here.

How many of you are attending the DRI Annual Meeting in Chicago in a few weeks?

As you may recall, our editor, Jim Dedman, plans the annual Mecklenburg County Bar’s Halloween CLE each year. This year, it’s called “Halloween CLE III: The Law of Clowns, Ghostbusters, and Scary Movies.” That’s right; there is literally a component on clown law. You can learn more here.

Our favorite legal tweet of the week is one of our own, as we feel our colleague Lindsay Joyner deserves some additional recognition for being named one of Columbia, South Carolina’s Best & Brightest!

Congratulations to GWB’s own Lindsay Joyner (@lajoyner) on being named one of Columbia’s 2017 Best & Brightest! pic.twitter.com/r4iXjVwR5Z

Who’s going to the DRI Annual Meeting in Chicago next month? We’ll be there, so let us know! In fact, next week, we will be posting a bit more about this topic, so stay tuned for more information about the DRI Product Liability Committee’s events at the Annual Meeting.

Rest in peace, Grant Hart of the band, Hüsker Dü. In 1986, the band released Candy Apple Grey, which featured the single “Sorry Somehow,” written by Grant Hart. It features our favorite rock lyric about subpoenas. Read more about him here.

Our favorite legal tweet of the week comes from the North Carolina Bar Association, a committee of which recently addressed the Oxford comma debate. Behold that tweet below!

Once again, we turn to the world of music for news of curious litigation. For those unfamiliar with the Fyre Festival, the following is a synopsis:

The music event (from April 28–30 and May 5–7) is touting itself as “the cultural experience of the decade.” Though these islands are part of the Bahamas, this scattered string of pearls is way more barefoot and bronzed than cruise ships and coconut cocktails.

The Fyre Festival website explains its origins as follows:

Billy McFarland and Ja Rule started a partnership over a mutual interest in technology, the ocean, and rap music. This unique combination of interests led them to the idea that, through their combined passions, they could create a new type of music festival and experience on a remote island.

Reportedly, festival tickets cost $450 for a day pass and up to a $250,000.00 for a full VIP experience. Unfortunately, its organizers canceled the festival at the last minute, and hundreds of attendees allege that they were stranded on the remote island with sparse food and dangerously rustic accommodations. That sounds a bit more perilous than Woodstock, no? 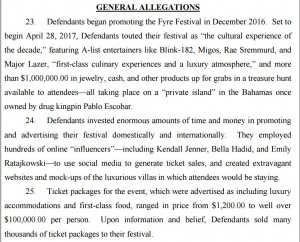 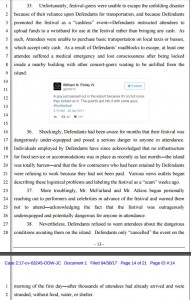 It is anticipated that there will be at least 150 members of the class. The lawsuit seeks at least $100 million in damages. Presumably, the lawsuit will be hotly contested, but Fyre Festival organizers are promising that “[a]ll festival goers this year will be refunded in full” and that they “will be working on refunds over the next few days and will be in touch directly with guests with more details.” Aggrieved guests may be pleased to find out that “all guests from this year will have free VIP passes to next year’s festival.” Who knows how that turned out?

On May 7, lawyer R. Davis Younts claims the Plaintiff amended the Complaint, and no defendant has answered. In fact, it appears that there may be some issues with serving them.

We at Abnormal Use are skeptical that a jury would be excited about awarding money to a 20-30 year old who has $250,000.00 lying around for VIP tickets to an island music festival, but maybe we are wrong. This could be the case of the century arising out of what could have been the music festival of the century. 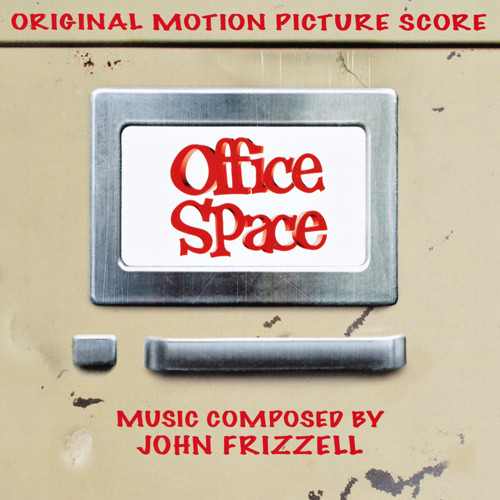 We here at Abnormal Use and Gallivan, White, & Boyd, P.A. wish you a festive and restful Labor Day. We thought we would celebrate this day of days by featuring an image of the cover of Rush’s “Working Man” single, but apparently, that song, though epic, was not released as a single. So, there is no such image to post here! That said, we’ve elected to post the cover of the original score soundtrack for the cult classic, Office Space.

Over the years, on Labor Day, we’ve featured the covers of labor-related comic books, examples of which you can find here, here, and here. (While preparing this post, we did find a reference to the Kryptonian Labor Guild, but that just doesn’t seem right for today.).

Whatever the case, be safe on this holiday, and we’ll see you back here on the blog tomorrow.

We hope you are doing well, dear readers. As you might imagine, it’s been a tough week.

We here at Abnormal Use are saddened by the destruction wrought by Hurricane Harvey in Texas. Are you looking to help the citizens of Texas? From yesterday’s E-Blast from the South Carolina Bar:

The Supreme Court of Texas has issued an order to allow out-of-state attorneys to provide legal services in Texas as part of Hurricane Harvey relief efforts. Bar members wishing to participate in these efforts must meet these requirements and complete and return the registration for temporary practice of Texas law attached to this order. The State Bar of Texas has also asked attorney volunteers to fill out this form regarding assistance they are able to provide. More information about how to assist will be provided as opportunities are organized.

If you can assist, please do.

On a lighter note, our favorite legal tweet of the week involves, of all things, the Oxford comma.

At today’s @NCBAorg retreat, we beheld a fierce but friendly skirmish in the Oxford comma war. @BrandonJHuffman argued against it, I for it. pic.twitter.com/qMaqyASHmH

As we ready ourselves for the Labor Day weekend, we wish all of you a safe and festive holiday. We will see you again next week.

Did everyone survive this past Monday’s solar eclipse? As we mentioned, three of our four offices fell within the fabled path of totality!

If you use Twitter, you might be aware of #PracticeTuesday, a hashtag dedicated to legal and practice tips. Well, our editor, Jim Dedman, enjoys the discussion so much that he crated his own #PracticeTuesday playlist, which features such gems as George Harrison’s “Sue Me, Sue You Blues,” INXS’ “Mediate,” and “The Trial of the Century” by the French Kicks. If you enjoy #PracticeTuesday or Spotify, we recommend that you investigate further. We’ve embedded the playlist below for easy access.

It’s been a while since we’ve selected a favorite tweet of the week. In fact, it’s been some time since we’ve posted an episode of Friday Links. That said, Our favorite legal tweet of the week comes from GWB’s own Stuart Mauney who celebrated his 30th anniversary with Gallivan, White, & Boyd, P.A. yesterday. Congratulations, Stuart!

30 years ago today I started my legal career w/ @GWBLawFirm Privileged to have been part of GWB journey! Thanks to all the GWB family.