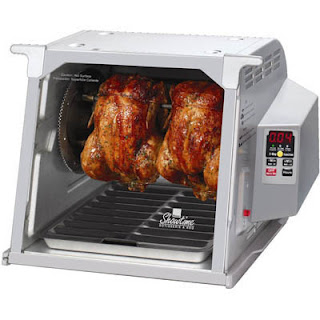 It’s difficult coming up with award-winning content every week. Perhaps that’s why we here at Abnormal Use have not won any awards. Not to be deterred, contributors at the blog scour the web for news and decisions that could provide the kernel of inspiration to set us on our way to winning the blog equivalent of the EGOT. (“30 Rock” premieres on September 23, with a live episode on October 14.) Today, we tread into the sensitive subject of infomercial products.

“In December 2005, James Bishop purchased a Ronco rotissiere oven which was designed, manufactured, marketed, and distributed by Ronco Corporation.” Kentucky Farm Bureau Mut. Ins. Co. v. Ronco Acquisition Corp., No. 2009-CA-001979-MR, 2010 WL 3515808 (Ky. Ct. App. Sept. 10, 2010) [PDF]. Unfortunately for the Bishops, their home burned completely in December 2007, and, even more unfortunately for the Bishops, Farm Bureau pursued a claim against Ronco, asserting that the Ronco oven caused the fire. I’m sure it’s awful having your home burn to ashes. It’s worse when everyone knows that you can’t say no to an infomercial.

Ronco asserts that its oven gives you access to fresh “healthful food [that] has never been easier to prepare.” The webpage also presents testimonials from people who have lost 20+ pounds after buying the oven. Since being a lawyer prevents me from believing anything that I see or hear, let me posit an explanation for this advertising. Consumer A drops $160 + S&H on an oven, and probably more with the purchase of the optional “Rib Basket,” which is “Great for 3 or 4 people.” Upon receipt of the oven, Consumer A realizes that in purchasing the oven, he has spent his food budget for the next two weeks and will be unable to actually buy anything to cook in the oven. By not eating for the next two weeks, Consumer A loses 20 lbs, entirely due to the fact that he purchased the oven. Adding to the absurdity is the notion that the oven’s 3-hour automatic timer allows the consumer to “spend less time cooking and have more time for your active lifestyle.” I’m just guessing that someone who is willing to sit and watch an infomercial, rather than do anything else, to the point where he would order the product, is probably not concerned about an active lifestyle. None of his friends would say that he is at the pinnacle of fitness. He may, in fact, have the nickname, “Rib Basket.”

Fortunately for us, this case has legs. While it may be hard to believe that the original Ronco Corp. went bankrupt, the successor corporation, Ronco Acquisition Corporation, assumed (according to this court) its potential liability in this case via an Asset Purchase Agreement. The Kentucky Court of Appeals then reversed the lower court’s grant of summary judgment to Ronco, and remanded the case. Hopefully, we can bring you more as the facts of this case develop. Until then, you may want to stay away from the oven and try the Pocket Fisherman instead.

Will you please assume my liability?

Several weeks ago, the defendant in Altman v. Motion Water Sports, Inc., No. 3:07-cv-01383, 2010 WL 2747306 (D. Conn. July 12, 2010), asked the District of Connecticut to grant its motion for summary judgment finding that it, as a successor corporation, is not liable to plaintiff for his injuries from a defective product that it neither manufactured nor sold to plaintiff. The Court denied defendant’s motion, providing some insight into the law of Connecticut on successor liability.
Plaintiff, Russell Altman (“Altman”), purchased water skis from Earth and Winter Sports, Inc. (“EWS”) some time prior to March 28, 2003. On this date, EWS sold all of its assets to Motion Ocean Sports, Inc. (“MOS”). The purchase agreement between EWS and MOS expressly provided that MOS did not assume any liabilities of EOS. Further, there was no continuity of stock, stockholders, or directors. On the other hand, after the MOS purchased EWS’s assets, MOS continued to manufacture the same products, under the same names; took over the EWS factory; and hired approximately 50 of EWS’s former employees.
After the take-over, on July 21, 2004, Altman fell while water skiing and one of the skis failed to release from his foot. Altman alleged permanent physical injuries arguing that the ski was defective in several respects. Thereafter, Altman filed suit against MOS to recover for his injuries. In response, MOS moved for summary judgment on the ground that “under a general common law rule relating to corporations, a purchaser of the assets of a corporate business is not liable for the debts and liabilities of the previous owner of those assets.” Altman’s arguments in opposition to MOS’s motion included an argument that certain exceptions to the common law rule against asset-purchaser liability applied in this situation. See this opinion for all the other grounds Altman asserted in opposition of MOS’s motion.
The general rule is that “a corporation which purchases all the assets of another company does not become liable for the debts and liabilities of its predecessor unless (1) the purchase agreement expressly or impliedly so provides; (2) there was a merger or consolidation of the two firms; (3) the purchaser is a ‘mere continuation’ of the seller; or (4) the transaction was entered into fraudulently for the purpose of escaping liability.” Ricciardello v. J.W. Gant & Co., 717 F. Supp. 56 (D. Conn. 1989). Altman relied upon the third exception and argued that MOS was a mere continuation of EWS.
Within the “mere continuation” exception, the Court identified several different theories. The first is the so-called common law exception. Under this theory, the Court found that MOS was entitled to summary judgment because there was no transfer of corporate stock between the two companies and there was a total lack of continuity of shareholders and directors. Next, the Court stated that the continuity-of-enterprise theory applies where “the successor maintains the same business, with the same employees doing the same jobs, under the same supervisors, working conditions, and production processes, and produces the same products for the same customers.” The Court found that MOS did many of these things and that Altman was entitled to full discovery on this theory.
The final theory was the “product line” exception to the rule against successor liability. The Court noted that unlike the other two theories which were widely accepted in Connecticut, no Connecticut appellate court had considered the product-line theory. After considering the decisions of Superior Courts that have considered this theory, the Altman Court stated that since this theory was more consistent with the consumer-protection goals of the Connecticut Products Liability Act, he was entitled to invoke this exception and engage in full discovery on its applicability.
This case shows that there are not merely four exceptions to the rule against successor liability but theories within those exceptions that are being continually argued. If a corporation, such as MOS, takes over the assets of another corporation, it should be aware of these exceptions and ensure that their practices would not allow a plaintiff to successfully argue successor liability.
posted by Mary Giorgi
Post the first comment
Tags: Connecticut, Successor Liability

In the 2000-2001 recession, there was a consolidation in the cement mixer industry, which I solely and subjectively theorize was due to a reduction in the amount of cement produced for nefarious uses. One wonders how the current “downturn” affects such businesses. Snitches may need to select alternative footwear.
Plaintiffs like David Ryan will likely have no cement mixer manufacturer to sue. Ryan v. Smith, 2010 WL 743946, No. 06-5866 (D.N.J. Mar. 4, 2010) centers around asset sales and their effects on successor liability. Ryan worked as a driver on a cement truck. He suffered injury on December 2, 2003 when the ladder on his 1988 Rex 770 cement mixer detached from the truck while occupied by Ryan. The Rex 770 was manufactured by Rexworks, Inc., and, prior to Ryan’s injury, the assets of Rexworks underwent two different sales. First, Rexworks sold its name and cement mixer designs, along with other assets to TEMCO pursuant to agreement. The Agreement provided that no liabilities outside those named in the agreement were assumed by TEMCO, and TEMCO took possession of the assets in June 2000. TEMCO asserted that it was mainly interested in a transmission manufactured by Rexworks, which had an excellent reputation in the industry, for incorporation in its own products. After a few months, TEMCO sold the assets of its cement mixer business to Oshkosh Truck Corporation, and, again, all liabilities of TEMCO were excluded from the asset purchase. On March 6, 2001, the date of the Oshkosh purchase, “the Rex product line was no longer being manufactured by anyone.” Id.
Ryan wanted someone to be liable for his ladder-based injury, and, obviously, TEMCO and Oshkosh didn’t agree to assume any liabilities. The District of New Jersey applied New Jersey’s substantive law:

The social policies underlying strict product liability are best served by extending strict liability to a successor corporation that acquires the business assets and continues to manufacture essentially the same line of products as its predecessor . . . .

Ramirez v. Amsted Indus., Inc., 431 A.2d 811, 825 (N.J. 1981). Even though TEMCO and Oshkosh continued to manufacture dump trucks, the Rex line of dump trucks was essentially discontinued. Ryan argued that the evidence showed that TEMCO had incorporated the use of the Rex transmission in its products, which was sufficient to show the continued manufacture of the product line. Had Ryan been injured by the transmission, this argument may have won the day, but Ryan was injured by the ladder, for which there was no evidence of continued manufacture.

Ryan was then forced to argue based on fairness and policy considerations. Ryan had no remedy absent successor liability. The trial court was not persuaded and stated that the product line test was dispositive. Summary judgment for the defendants was granted. Ryan is an interesting case in transactions of asset sales. Look for potential defendants to incorporate purchased products piecemeal, trying to toe the line in taking advantage of the purchased assets while extinguishing successor liability. Plaintiffs would do better to frame these types of issues in terms of being injured by a complicated piece of machinery as a whole, rather than injury occurring due to one particular part of the machinery. Ryan may have been more (or less) fortunate had he been injured by a more integral part of the mixer.