One Not So Great Burger Meat Recalled

Recently, the U.S. Department of Agriculture issued a news release regarding the recall of 226,400 pounds of ground beef from a company called One Great Burger out of Elizabeth, New Jersey. Customers had complained that the meat was discolored and emitted a bad odor.

According to the release, the company had repackaged and redistributed meat that had been returned to them. This immediately reminded us here at Abnormal Use of the 1992 ABC “PrimeTime Live” television show, in which undercover reporters went inside Food Lion and discovered the grocery chain had been going to rather drastic lengths to extend the life of some bad meat. Apparently, Food Lion employees had been grinding out-of-date meat with fresh meat, redating meat that had passed its expiration date, and even using bleach to mask rank odors from expired meat. (Side note: Food Lion sued ABC over the story on theories of fraud, breach of the duty of loyalty, trespass, and unfair trade practices and a decision was reported in the case Food Lion, Inc. v. Capital Cities/ABC, Inc., 194 F.3d 505 (4th Cir. 1999)).
So, you’d think that One Great Burger may have had some clue that re-dating meat is not a good idea, or great for your company’s image.
This recall is a good reminder that when it comes to food recalls, the USDA has three recall classifications, which focus on the likelihood and seriousness of negative health effects from the item being recalled, and are defined as follows:
Class I: “This is a health hazard situation where there is a reasonable probability that the use of the product will cause serious, adverse health consequences or death;”
Class II: “This is a health hazard situation where there is a remote probability of adverse health consequences from the use of the product;” and
Class III: This is a situation where the use of the product will not cause adverse health consequences.”
The One Great Burger recall is classified by the USDA as a Class II recall.
posted by Frances Zacher
Post the first comment
Tags: Fourth Circuit, Recalls, USDA

In the 1960s and 1970s, the Ford Pinto was dubbed “the barbecue that seats four.” The gas tank, located in an unfortunate location in the back of the car, had an even more unfortunate habit of rupturing, and exploding, if the car was rear ended. 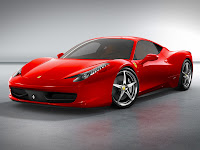 Recent news reports suggest that the new Ferrari 458 Italia may have a similar flame-broiled propensity. According to Ferrari, the heat shield located in the wheel assembly of the car could become deformed, “bringing it too close to the exhaust system and igniting.”
The company has recalled the cars so that the glue adhering the heat shield can be replaced with metal fasteners, because if the adhesive ignites, it could “render the vehicle inoperable and possibly result in a crash,” according to the National Highway Traffic Safety Administration. Yes, we imagine so.
Which begs at least two questions–first, what possessed the designers of this 4.5 liter, 570-horsepower, $230,000 automobile to forgo the metal fasteners in the first place and use glue to adhere the heat shield to the car? And, second, can we choose a Pinto rental while the Ferrari is being fixed? At least the Pinto will be going far slower than 120 mph when it explodes.
posted by Frances Zacher
Post the first comment
Tags: Design Defect, Recalls

People of WalMart beware: 190 tons of the mega-store’s deli meat have reportedly been recalled due to potential Listeria contamination. The affected product comes from Buffalo, New York-based Zemco Industries. According to the USDA press release, the problem was discovered as the result of a retail sample collected by the State of Georgia that confirmed the meat was positive for Listeria monocytogenes.
There have not yet been any reported illnesses associated with the sale of the Zemco deli meat, but according to the USDA, eating food contaminated with Listeria can cause listeriosis, a potentially fatal disease. It also may cause high fever, severe headache, neck stiffness and nausea. Those most susceptible to listeriosis are infants, the elderly, and others with weakened immune systems. Healthy people rarely contract the disease.
As you can see from our previous post here, this is only the latest in a string of food recalls that have taken place this summer. Perhaps the fall will bring better news.
posted by Laura Simons
Post the first comment
Tags: Food, Recalls