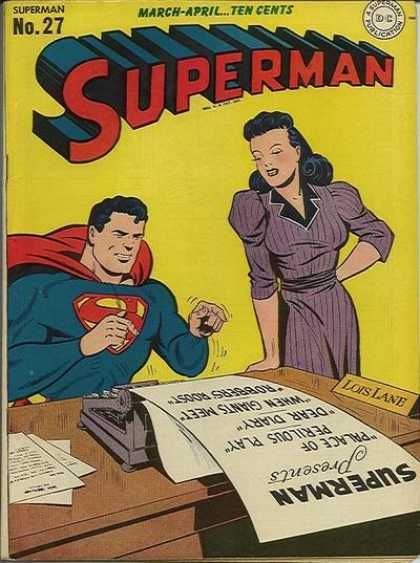 Enough said: Please consider the arguments set forth in “Why you Need to Stop Typing and Start Dictating” from the Tips for Lawyers website. Very important lessons here, folks. We’ve run into a lot of younger lawyers who believe that their savviness with computers prompt an aversion to dictation. As the article suggests, though, there’s nothing more efficient than using the dictation process to place your thoughts onto the written page (unless your Superman, depicted above on the cover of Superman #27, published way, way back in 1944).

Of course you know that many of our Abnormal Use bloggers also use Twitter. Today, we direct you to the Twitter account of longtime Twitter user Stuart Mauney whose tweets you can follow here. (In fact, it was Stuart who directed us to the dictation article referenced in the preceding paragraph!). Enjoy his tweets!

After the nonsensical insurance claim subplot in Now You See Me, we have no interest in seeing the new sequel.

There is, apparently, a 1993 issue of Fantastic Four entitled “Chaos in the Courtroom.” You’ve been warned.