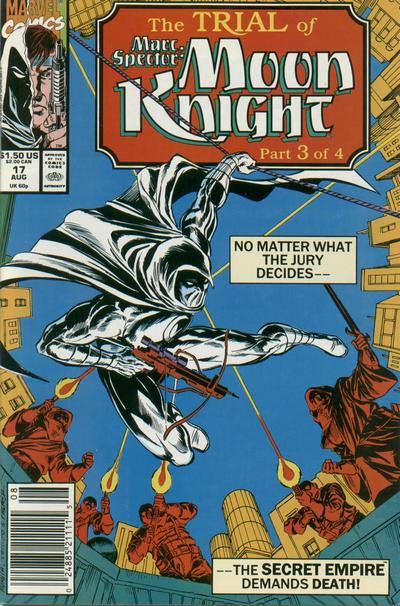 So, above, you’ll find the cover of Marc Spector: Moon Knight #17, published way, way back in 1990. “No matter what the jury decides – the secret empire demands death!” That statement seems to suggest that the outcome of the trial is irrelevant. What kind of criminal justice system is Moon Knight facing, anyway? Here’s the rather confusing summary of the issue from Comicvine:

Marc’s trial begins. Meanwhile, Marlene and Frenchie are trying to escape the mercenaries they mistakenly thought would be able to help them free Marc. They bring out the innocent victims of Raposa’s rise to power, and force Marc to look upon them, much to his dismay. Back in New York, Jeff has decided to use Moon Knight’s costume and gadgets in his absence to follow in his father’s footsteps and perform some break and enters. He accidentally stumbles upon a Secret Empire meeting and is almost killed by their security patrol. He manages to escape but is caught on camera in the process. While Marc wonders what his father would think of him right now, Marlene and Frenchie are planning their rescue from a nearby hotel room. Meanwhile, Carmilla takes the stand and Marc notices that she hesitates when asked if her husband had a weapon when he was shot. This makes Marc realise there might be more to the story. The council finds Marc guilty and he is sentenced to hang in 3 days time. Marc’s cellmates are planning their escape, and even though he originally declined their offer to join them, he has now changed his mind.

You know, it’s not easy finding these legally themed comic book covers after doing this for five and a half years.

Don’t forget! You can register for the Halloween CLE planned by our editor, Jim Dedman, by going here!

Our favorite tweet of late is an older one, from June, but it is simply perfect in its sentiment:

Eternity (noun): The amount of time it takes to draft, negotiate, and sign a settlement agreement after the parties orally agree on terms.