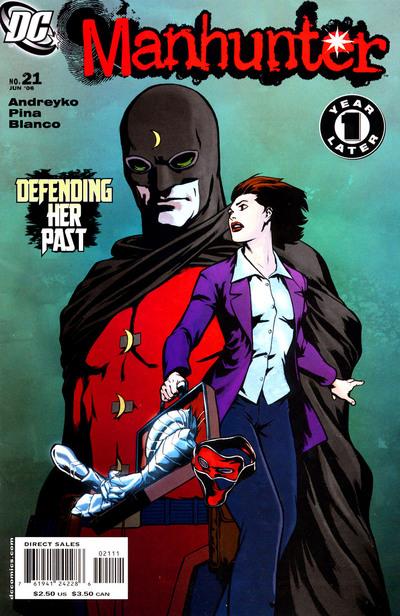 Above, you’ll find the cover of Manhunter #21, published not so long ago in the halcyon days of 2006.  We see Kate Spencer, Manhunter’s alter ego, with her costume falling from her briefcase.  Get this! She’s an Assistant United States Attorney by day.  Here’s an excerpt from her character biography on Wikipedia:

Kate Spencer is a federal prosecutor who grows increasingly tired of seeing guilty criminals evade punishment. Copperhead, a supervillain on trial for multiple murders and cannibalism, avoids a death sentence and escapes from custody after killing two guards. An angry Kate takes matters into her own hands, stealing equipment from an evidence room and killing Copperhead. Calling herself Manhunter, Kate blackmails a former weapons manufacturer for numerous villains named Dylan Battles — who is in the Witness Protection Program — into building, maintaining, and upgrading her armor, weapons, and gadgets.

Via his Twitter account, our own Stuart Mauney directs us to this article, entitled “Epidemic of Depressed Lawyers!“, by trucking lawyer Mark Perkins. As you may recall, Stuart has written on similar topics right here at Abnormal Use. In fact, not too long ago, Stuart served as the Chair of the SC Bar HELP Task Force, educating lawyers and judges about substance abuse and mental health issues in the legal profession. If you’d like to follow him on Twitter to learn more about these or other legal issues, you can do so here.

More evidence that Susan Saladoff’s “Hot Coffee” documentary is having an effect on the population. Sigh.