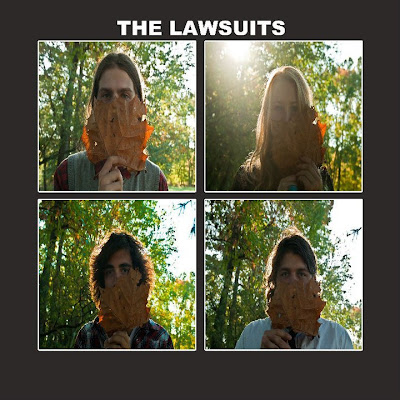 Today, Abnormal Use once again continues its series, “Abnormal Interviews,” in which this site will conduct brief interviews with law professors, practitioners, and makers of legal themed popular culture. For the latest installment, we turn to Brian Dale Allen Strouse, a vocalist and guitarist of the Philadelphia based band, The Lawsuits. We’re fascinated with that band’s decision to name itself after the chief component of litigation. Strouse was kind enough to submit to a brief interview with Abnormal Use about his band’s music and name.

1) How did you decide to call yourselves The Lawsuits?

We decided on the name The Lawsuits because originally we were called The Mondays. . . . [T]here was a band called The Mondays from New York (or New Jersey), and they had [an] interest in playing our favorite bar where we got our start (John and Peter’s, New Hope, PA). We called to confirm a date for a show we had booked, and the girl called me Rick or James or Robert or Zimmy, and I said, “Excuse me?” Turns out, the bar booked The Mondays by accident, when they were intending to book THE MONDAYS. We thought it’d be clever to change our name to The Lawsuits, as we were in a situation where legal matters possibly could have been taken. Plus, two of my brothers are lawyers, and it wasn’t already a band name.

2) What has been the reaction to that choice of name?

The reaction has been mixed. The name personally has grown on me and the other members, but believe me, we’ve had our fair share of people claiming we can do better, or the name “turns them off.” I like that, though. If I can bring out an emotion of dislike, then at least I’m getting something in return from the audience. They don’t like the band name, but they like the band? Even better. Anything to position yourself strategically, placing yourself (in this case, the band) in a situation where, from the moment we walk into the venue, we’re at a disadvantage. It’s the Rudy factor, the underdog story. It’s true art. We’re trying to infect the audience, not so much live, but more so with the recorded music. And once someone is infected, (Leo Tolstoy would agree) they can’t not get “it.” It’s real, it’s honest, it’s wholly human. Some songs take two years to finish, some take two minutes, but the bottom line is this: Regardless of the name itself, once someone really gives the music a shot, and if they’re capable of liking the music (can’t deny preferences and tastes), they will see that there is something bright and strangely refreshing going on in Philadelphia.

3) How would you describe your music?

We tend to describe our music as folk-rock-blues.

4) What do you think is the biggest challenge facing musicians in 2011?

The biggest challenge that musicians face in the year 2011 is the fact the market flooded, and there are only a handful of boats floating around. There are so many musicians, and so many outlets musicians can use to promote their music. Glenn Morrow, the owner of Bar/None Records in Weehawken New Jersey did an interview . . . [in which] he said something like this, “The modern day label’s job is to weed through all the bands out there and find that gem.” Seems to be that labels now-a-days are much more cautious with their time, energy, and money. I suppose they must be. It is a business. Labels aren’t everything, though, when we dissect the idea of “what it takes to make it” or “What’s standing in my way between me and my goal?” or “What’s my biggest challenge?”, the answer is “What is it?” or “What’s your goal, really?” or “Biggest challenge, in what sense?” Ideally, I’d have tons of money, time, energy, contacts, oh, and talent, and then I’d simply combine all of that together in a large saucepan over medium heat and just sit back. However, the reality of it is this: The average musician has a finite amount of money, time, energy, contacts, and talent. They must rely on the “unexplainable” [and] “unteachable” things like luck and a workhorse attitude. In short, the biggest challenge facing musicians in 2011 is the face they see in the mirror. Even though the market is flooded and labels aren’t biting, almost anything is possible with belief.

5) As musicians, what do you think of the process of working with lawyers in the music industry?

As a self-proclaimed musician, I don’t think much about the process of working with an entertainment lawyer because I have yet to do so. I believe they are an important piece of the puzzle. They are, like the a-typical musician, “thinkers”- modern day philosophers in a sense. Also, everything now-a-days comes with a contract, and lawyers are expected to excel at deciphering the fine print. They are expected to protect the best interests of their client and advise their clients on which path to take.

BONUS QUESTION: What is your favorite song about the law or legal themes?

The Bobby Fuller Four’s “I Fought The Law” is a good one. The Clash did a great version of it, as well. The Dead Kennedy’s also did a version. I believe their’s goes, “I fought the law, and I won.”

Here’s a few videos of the band we found on YouTube (including one tune called “Appeal #46” and a cover of The Beatles’ “Oh, Darling”:

BIOGRAPHY: The Pennsylvania band The Lawsuits formed in 2008 as a four piece rock band, morphed into a ten piece band in 2009, and fine tuned the sound back to a four piece the same year. At present, the Lawsuits are: