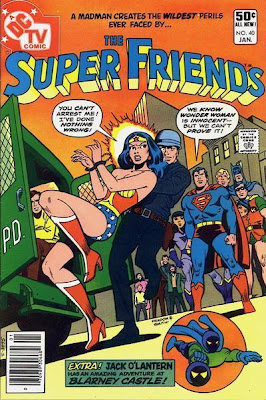 Wonder Woman is arrested by a police officer in the comic book cover above, that of Super Friends # 40, published back in early 1981. We think we know how this story will end, as we previously wrote about a Wonder Woman encounter with the judicial process when she was forcibly removed from a courtroom for disruptive outbursts. In this altercation, Wonder Woman exclaims that she has “done nothing wrong,” although Superman’s response is puzzling. He remarks “We know Wonder Woman is innocent – but we can’t prove it!” Does the Man of Steel not know of the presumption of innocence?

Speaking of which, friend of the blog and law professor Mark Osler (who we once interviewed here for our Abnormal Interviews series) recently claimed on his own blog that Batman went to Yale Law School. We’re not so sure about that, but okay.

How can you not read this post by John A. Day, of the Day on Torts blog, which begins with the following sentence: “A plaintiff in a slip and fall case in New York was permitted to testify as an expert on pigeon droppings.” There’s a Daubert joke in that tale, but we can’t quite get there.

We’re crestfallen that we neglected to include Husker Du’s “Sorry Somehow” in the list of rock songs about lawyers and the law we posted this past Monday. That 1980s college rock classic includes the immortal line, “Send me a subpoena, baby, tell me what to do.”

In light of our love of the character, we direct you to a post at the Legal Profession Blog entitled “Calling Jackie Chiles.” The post is not about “Seinfeld,” but rather the dismissal of a personal injury suit arising from an accident at a Starbuck’s.