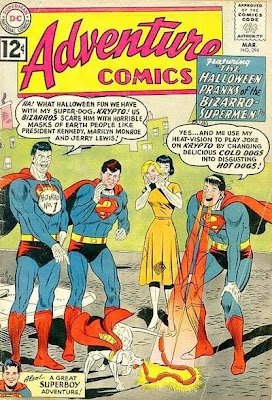 In the spirit of Halloween, we present to you the comic book cover above, Adventure Comics #294, published way back in 1962 (which you might have surmised from the references to JFK, Marilyn Monroe, and Jerry Lewis, all of whom are apparently familiar to Bizarro). With a title like “The Halloween Pranks of the Bizarro Supermen,” though, how can you go wrong?

Rather than link a series of frightfully normal legal news stories, today, we here at Abnormal Use thought we would explore something a bit more apprehension inducing and suited to the holiday at hand. So, to celebrate the occasion, we asked two of our contributors (and our non-blogger associate Nick Farr) to share their thoughts on the movies they fear most. (Specifically excluded are movies about associates attempting to meet billable quotas. We won’t count The Paper Chase, either, although we wonder if anyone still watches that movie, anyway).

Nick Farr: Before I saw The Exorcist as a young teenager, I thought I was pretty tough. The Shining was boring. “It” made me laugh. Halloween just left me with a childhood crush on Jamie Lee Curtis. There was something about The Exorcist, however, that affected me in a way that Betsy Palmer (a/k/a Mrs. Pamela Voorhees) yielding a machete simply could not. Maybe if Michael Myers would have spun his head around backwards, Halloween would have been more to me than a breakthrough performance for another Hollywood starlet. Maybe if Pennywise the Clown would have crab-walked down a flight of stairs, I would not have thought of “It” as an adult-sized Bozo. Even today, when I reminisce about Regan walking into that party and innocently proclaiming, “You’re going to die up there,” chills run down my spine, and those feelings I felt seventeen years ago are resurrected. Tonight, I better sleep with the holy water.

Jim Dedman: The scariest movie I’ve seen would be, of course, Stanley Kubrick’s The Shining, although that is not the best story I have about a fear-filled work of cinema. In July of 1999, I was a first quarter law student at Baylor University in Waco, Texas. That month, I faced one of my first – and most dreaded – finals: Civil Procedure. (That frightful test, written and administered by the now retired Professor Trail, was scary enough.). After enduring that test, I took the rest of the day off, drove to Austin, and saw The Blair Witch Project, then out in theatres for only a few days, at the now defunct Dobie Theatre. Shot in a point of view fashion, the film profiled the misadventures of a group of students who venture out into the Maryland woods to explore the Blair Witch myth. The now defunct Dobie was a small, indie venue, and the particular theatre we were in had less than hundred seats. Imagine seeing that movie in such a place before all the hype and newspaper coverage ruined the original guerrilla style marketing of the film. At that time, there were still people who somehow believe the “found footage” was real. Of course, at the end of the day, I can’t say which was more horrifying, the film or the final.

Kevin Couch: I thought long and hard about the movie that terrifies me the most, and I settled on 1985’s Follow that Bird, a film adaptation of the beloved children series, “Sesame Street.” In the film, Big Bird runs away from home, a much madness ensues. Although you may scoff initially, I ask you, what is not terrifying about human-puppet interaction, especially when Miss Finch, a social worker puppet with the nefarious sounding Feathered Friends Society, is given the power to alter the human-puppet relationships foundational to all that is “Sesame Street”? In addition, given the films Big Brother feel that the social worker knows better than the (albeit nontraditional) family, I’m surprised that the film wasn’t re-released for its twenty-fifth anniversary this summer and run at Tea Party rallies. After all, the real horror of the film (again, aside from the human-puppet interaction) comes after the credits. Who really believes that the sinister Miss Finch is content to let Big Bird stay at Sesame Street? No one. She will come like a thief in the night and remove Big Bird from his nest on the basis that it is in his best interest, and Gordon and Maria will be left only with sorrowful years of fighting the system in the family courts. If a nine-foot yellow bird puppet is not safe from government intrusion, how safe do you think you are? And you thought Nosferatu was scary?

And that dear readers, is all we here at Abnormal Use have to say about scary movies. Of course, the rumor is that this very afternoon, the South Carolina Bar will release the names of those who passed this past summer’s bar exam. What could be scarier than the wait for that?