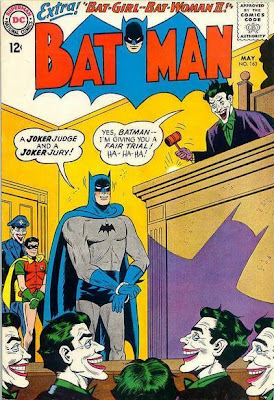 Above, you’ll find the cover of Batman #163, an issue published way back in 1964. We think that defendant Batman may have grounds for a motion for recusal of the the judge, but we doubt it will be granted. And if that’s the jury, we’d hate to see the venire panel.

Don’t forget: You can still nominate our fair site, Abnormal Use, for consideration in the ABA Journal‘s Top 100 Legal Blogs contest. But today is the very last day you can do so. The last day! See our earlier tongue in cheek plea for support here (which also provides instructions how to submit your nomination, which you know you want to do).

Blogger and Law Professor Alberto Bernade at The John Marshall Law School asks, “What’s with all the lawyer shows on tv?!” That, dear readers, is a question that we feel must be asked, especially in light of our recent reviews of the new legal dramas “Outlaw” and “The Defenders.” Just once, we’d like to see a television show in which the first year associates are enduring a harrowing week of document review. Or, perhaps, a program in which one junior associate’s problem of the week is a senior partner’s fondness for serial commas in a particular memorandum of law? Or an episode in which a first year associate’s biggest dilemma is how long it took he or she to draft an answer to a complaint?

Today sees the release of The Social Network, a film about the Facebook, a website. As the operators of a website, we here at Abnormal Use look forward to the day when Aaron Sorkin and David Fincher will craft a film about us. However, our contributor Kevin Couch insists that Leonardo DiCaprio play him in any such film, but we just don’t see it.

Apparently, there is a new law blog dedicated to legal productivity called, of all things, Legal Productivity. We’ll be checking it out. (Hat Tip: The Mac Lawyer).

Eric Goldman of the Technology and Marketing Law Blog has an interesting post on a new New York state case on the discoverability of deleted social networking profile data for impeachment purposes. Remember: Just because your Plaintiff has deleted those incriminating photographs and statements from their Facbeook profile, that doesn’t mean they’re gone forever, at least not yet.