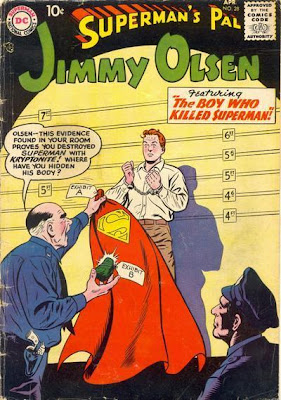 Above, you’ll find the cover for Superman’s Pal, Jimmy Olsen #28, published way back in 1958, which depicts Jimmy Olsen as “The Boy Who Killed Superman.” Note that he is in a police line-up, presumably for identification purposes, though the police officer is already presenting the evidence against him. (We love that there is a label tied to a piece of Kryptonite noting that it is “Exhibit B,” even though Olsen has yet to be identified, much less indicted or brought to trial.). We’ll leave it to the criminal lawyers to opine on whether the officer’s asking “Where have you hidden [Superman’s] body?” constitutes a custodial interrogation. However, this being 1958, Jimmy would not yet have been afforded many of the protections fashioned by the Warren Court. Oh, well.

Speaking of comic books, after months and months of commenting upon silly and fun superhero/courtroom comic book covers in our Friday Links posts, we now learn that the Ivy League has taken an interest and created an exhibit on that very subject. Earlier this month, our friends at the Yale Law School Library debuted the exhibit, “Superheroes in Court! Lawyers, Law and Comic Books,”which is curated by Mark S. Zaid. If you find yourself in Connecticut, you must see this exhibition, which runs until December 16, 2010 . See here for some official information on the exhibit, including a handful of covers, some of which even we here had not previously seen. (Thanks to eagle eyed reader Ryan Steans for bringing this New York Times piece on the exhibit to our attention.).

Man, the Wall Street Journal Law Blog beat us to the punch with the Rolling Stones allusion in their piece on the Ninth Circuit’s striking down of a municipal tattoo parlor ban. South Carolina is no stranger to such issues, as it banned tattoo parlors until 2006, when the 36 year old prohibition, which had survived a constitutional challenge in the courts, was repealed by the legislature. For more on the Ninth’s Circuit’s recent ruling, see here, here, and here.

The Evidence Law Prof Blog analyzes a recent North Carolina case regarding the authentication of emails, still a hot topic, even after all of these years of email use.

Civility seems to be the issue of the week. The DRI Blog has a piece by Brett A. Ross entitled “Professionalism: It’s not Just for Kids Anymore,” in which the author notes that “as mature practitioners, we should know better how to respond to bad behavior by our opponents even though it often seems that is not the case.” Meanwhile, Lawyerist has “Are You Civil With Opposing Counsel?,” in which the author’s advice is “Stick to your guns and keep it civil. It will pay off in the long run.” And our pals at Overlawyered have this post, in which they analyze a recent scolding of uncooperative counsel by a U.S. Magistrate.

Yesterday, Kevin Couch, one of our intrepid bloggers at this site, posted his review of the new Jimmy Smits legal drama, “Outlaw.” Apparently, the show is about a U.S. Supreme Court Justice, played by Smits, whose frustration with the system causes him to resign his seat on the Court and go about righting wrongs and correcting injustices in the trenches. (It seems he was in a pretty good position to do that on the U.S. Supreme Court, but oh well, it’s television.). Our thought: It would have been much more interesting had this series been a direct sequel to “L.A. Law” and Smits was playing his old character Victor Sifuentes, who had somehow managed to make it all the way from Los Angeles to the nation’s High Court. Another potential benefit of that approach: Susan Dey cameos.

Finally, we learned this week that Bob Dylan, the immortal folk singer, the voice of his generation, will be playing a concert later this year in nearby Clemson. We’ve seen him before and walked away unimpressed, so we leave you with a piece from Seattle Weekly, entitled “Top 7 Reasons to Walk Out of a Bob Dylan Show.” (Full disclosure: we adore our CD of the 1966 “Royal Albert Hall” concert, but that show was some time ago.).