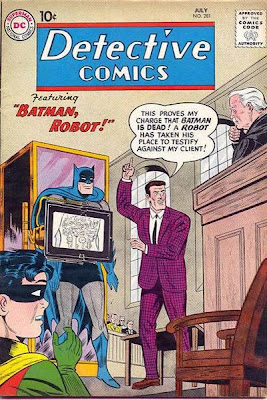 We think that there may be some junk science in the courtroom in the comic book cover depicted above, but unfortunately, Detective Comics #281 was published 33 years before Daubert. We’re not sure why Batman’s death is being litigated or why Robin is in the courtroom, but we would have advised some simple discovery requests on the Batman-as-robot issue, perhaps a request for admission along the lines of “Please admit whether you are a robot.” At least then a denial would have entitled the opponent to fees and costs.

South Carolina attorney J. Benjamin Stevens at The Mac Lawyer has this post, entitled “Top 10 Resources for Mac Junkies.” On a related note, the partners at our firm have still not supplied we few, we happy few, we band of bloggers with our own iPads.

Begins this New York Times article: “The singer and former Talking Heads frontman David Byrne has sued Gov. Charlie Crist of Florida, saying he used the Talking Heads’ song “Road to Nowhere” in a Senate campaign ad without permission.” We have nothing else to add to the news of this litigation, although it does provide us yet another opportunity to link to the fabled and extraordinary Fifth Circuit Talking Heads opinion.

James Parton has a post entitled “Obtaining Records from Facebook, LinkedIn, Google and Other Social Networking Websites and Internet Service Providers” at the DRI For the Defense blog. It’s worth a read, especially considering how challenging it is to actually obtain information from those types of entities in civil litigation.

Although it’s a bit out of our subject matter, we here at Abnormal Use are closely following the case of Justin Kurtz v. T&J Towing. Read more about it here. Based on the accounts of that dispute, how can you not be on Team Kurtz?

Jeffrey V. Mehalic at the West Virginia Business Litigation blog has this in-depth post on the recent Fourth Circuit opinion, In re: Abrams & Abrams, P.A., about which we blogged very briefly in last week’s edition of Friday Links.

As seen in the ABA Journal, a “new study finds that less attractive defendants fare worse in criminal cases when the jurors have an ‘experiential’ style of judging.” The author of the article, Debra Cassens Weiss, finds a nice way to say that “experiential” means not listening to the evidence and judging on legally irrelevant information. We would like to go on record that not all persons sporting a unibrow and English-style overbite are criminals. We would also like to see a study on how attractive lawyers fare versus less physically appealing advocates. Would you find for the ugly defendant represented by an objectively attractive counsel?

We are disappointed to learn that W. Lawrence Wescott of the Electronic Discovery Blog decided this week to end his blog. We enjoyed reading it.

The new South Carolina Business Law Blog celebrates its first two months of existence next week. Congratulations to them on that milestone, which is no small feat in the legal blogging world.