We’re taking a break this week from court related comic book covers to bring you the above, one of our favorite closing arguments from television sitcom history. That’s right, depicted above is the closing argument of Jackie Chiles, representing the main characters of “Seinfeld,” on charges that they violated a good Samaritan law, in the series finale of that program.

Maybe this guy’s got the right idea? Walter Olson at Overlawyered reports on a recent Indiana lawsuit in which the Plaintiff sued a local retail establishment, claiming that they prevented him from buying a lottery ticket, and of course, he would have picked the winning numbers, so they thwarted his win. How could they do that to him?

KC Johnson, who through his blog Durham in Wonderland, reported on the Duke lacrosse case several years ago, is now blogging the tragic Virginia lacrosse-related murder case. For his two most recent posts on that topic, see here and here.

If you haven’t already, check out this guest post by John A. Tartaglia III at the Drug and Device Law blog on “attempts in Congress to strip manufacturers of FDA premarket approved medical device manufacturers of their hard-won preemption defense.”

Oh, alright, we’ll do a comic book cover this week for good measure. Depicted below is Mr. District Attorney #65, originally published in 1958. We think that the defendant may have a good confrontation clause objection here, but then again, we’re not criminal lawyers. 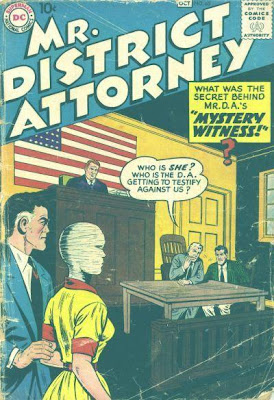