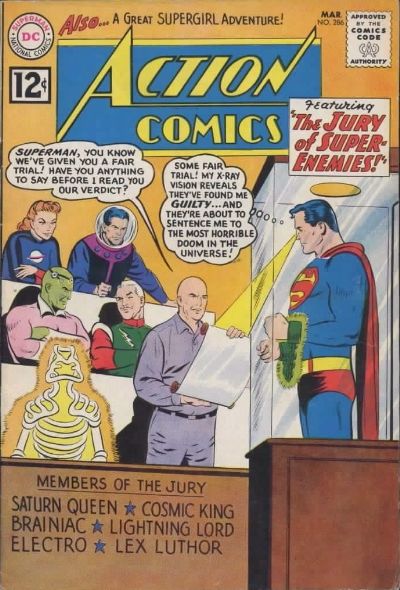 Above, you’ll find the cover of Action Comics #286, published way, way back in 1962. As you can see, Superman stands before “The Jury of Super-Enemies,” a body composed of Saturn Queen, Cosmic King, Brainiac, Lightning Lord, Electro, and of course, Lex Luthor. We’re thinking that perhaps Supes should have simply waived his right to a jury trial if these villains were to serve as the fact finders. In fact, imagine how bad the venire panel must have been for old Supes to end up with this lot serving as the jurors.

Okay, so footnote 7 of this recent Texas Supreme Court case cites to and quotes The Big Lebowski. We’re not entirely certain what to think about that, but now we’re anxiously awaiting a Miller’s Crossing citation. (Hat Tip: Paul Szoldra at Business Insider).

You might recall that back in April of 2011 we interviewed Brian Dale Allen Strouse of The Lawsuits, a Philadelphia rock band. Well, The Lawsuits are releasing a new EP, Tumbled, later this month. (That’s the cover depicted above.). For more information, see here.

A reader directs us to “Understanding North Carolina’s Proposed Constitutional Amendment Allowing Non-Jury Felony Trials” by Jeffrey B. Welty and Komal K. Patel. If you’re in North Carolina, you may want to read it before election day.

My son “I’d like to be a punk rocker, but it’s like lawyers. There’s too many of them.”