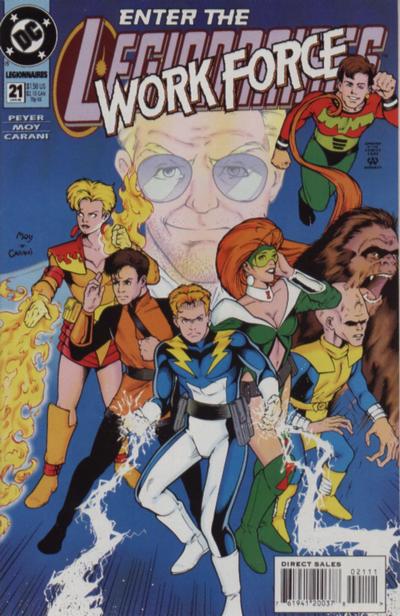 Happy Labor Day! Above, you’ll find the cover of Legionnaires #21, published not so long ago in the halcyon days of 1995.  Here’s the summary of the issue from Comicvine:

Live Wire joins the Workforce, a team created by Leland McCauley to compete with R.J. Brande’s Legion of Super-Heroes, after he quits due to legality issues. Meanwhile, the Legionnaires answer a plea for help from a prison located in a sun. Things seem to be going well until they are attacked by a spacecraft, causing the power to die in the prison eventually, letting loose all the criminals.

The Legionnaires – also known as The Legion of Superheroes – is a team of super powered heroes operating in the far, far future in the DC Comics Universe.  The Workforce is a rival team of The Legion, and with a name like that, how could we not spotlight them on Labor Day itself? Here’s what Wikipedia has to say about this “semi-heroic” team from the future:

The Workforce was founded by the corrupt industrialist Leland McCauley as a response to the Legion of Super-Heroes, founded by his rival R.J. Brande. When Live Wire was replaced in the Legion by his sister Spark, he joined the Workforce with the belief that McCauley could help him find his brother Mekt. While the team often appeared to be performing heroic deeds, everything they did was designed for McCauley’s profit. Karate Kid commented that the only reasons for being in the Workforce were selfish ones.

That is troubling indeed. Whatever the case, we hope that you had an eventful and safe Labor Day weekend.  Now, of course, it is Monday, the last day of the three day weekend, and the inevitable dread of the coming working week will soon arrive. What to do? You can check out our past Labor Posts (which also feature some labor themed comic book covers): here, here, and here.