In a previous post, we discussed the lawsuit filed by Kaci Hickox to challenge the quarantine imposed upon her following her return from a stint in Africa during which she treated Ebola patients.  Another Ebola-related lawsuit has now been filed.  Nina Pham, the nurse who contracted Ebola in a Texas hospital, filed a complaint in the district dourt of Dallas County, Texas against Texas Health Resources, Inc. (THR) the hospital system for which she worked at the time she contracted Ebola. 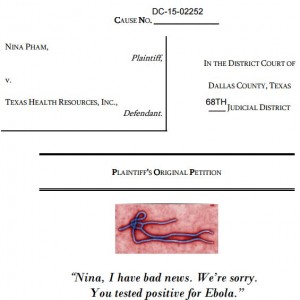 The complaint, which can be viewed here, alleges that the hospital had no plan to deal with Ebola and that the protocols in place were not adequate to protect employees against the virus despite the hospital’s advance knowledge that it should be prepared to deal with Ebola.  The thirty-six page, artfully written complaint is actually an interesting read, and it contains a number of shocking allegations.  It even has pictures!  abcNEWS outlined some of the more surprising allegations in the lawsuit here.  Some of the more interesting claims deal with the hospital allegedly violating HIPAA by releasing video footage of Nina Pham and disclosing details of her treatment without her consent.

Pham is represented by Charla Aldous and Brent Walker of the Aldous Law Firm in Dallas, Texas.  According to the docket, THR has not yet filed an answer, nor have any attorneys entered an appearance on its behalf.  According to this American Lawyer article, the hospital should have no shortage of Ebola litigation teams to select.