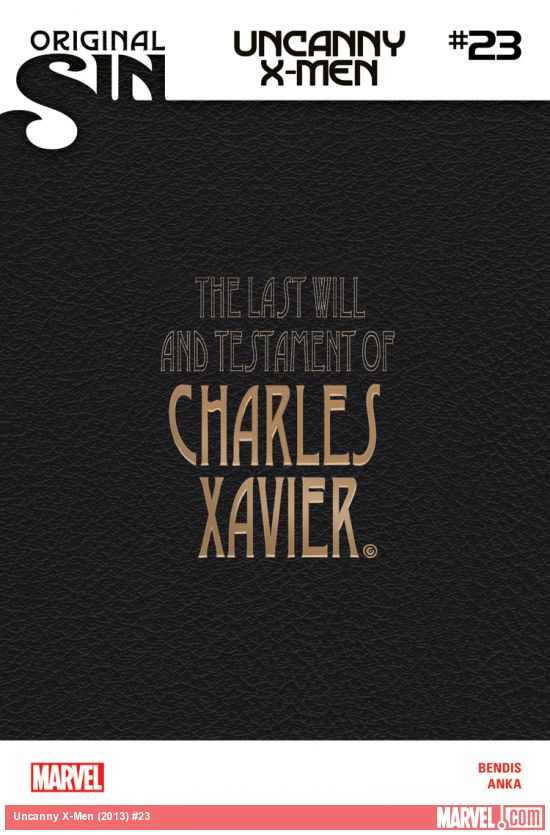 Okay, so how’s this for a legally themed comic book cover? Above, you’ll find the cover of Uncanny X-Men #23, published just a weeks ago in 2014. The cover is simple: It depicts “The Last Will and Testament of Charles Xavier,” who we all know to be the leader of The X-Men. What is his testamentary intent? Did he comply with all of the formal prerequisites required of the execution of a will? Who were the witnesses to its execution? We assume that with such a fancy cover page that it is not a holographic will. We’ll review the issue and report back dear readers. In fact, this is the same comic book issue that we mentioned last week due to the fact that a part of the narrative is set in Charleston, South Carolina.

Here’s some news: In this month’s ABA Journal, our editor Jim Dedman offers two contributions to its “12 Movies With Pivotal Lessons Featuring Lawyers” article. As a part of that piece, he was asked to choose a significant legal scene from a film and identify some of the lessons that lawyers can learn from it. Of course, he chose to write about the expert witness sequence in My Cousin Vinny (a film to which we here at Abnormal Use dedicated a week’s worth of posts on the occasion of its twentieth anniversary back in 2012). As for his other contribution, he chose to discuss the wonderful Wilford Brimley scene in Absence of Malice.

Here’s how he describes the scene in Vinny:

In the final trial sequence, Vinny calls an unsuspecting Mona Lisa to the stand to testify as an expert witness for the defense. In so doing, he draws an objection from the prosecutor (Lane Smith), who rises to question Mona Lisa’s expertise. He then conducts a brief voir dire of Mona Lisa—which, curiously, takes place in the jury’s presence—to determine whether she is indeed qualified to testify. Impressed by the depth of her automotive knowledge, the prosecutor withdraws his objection and the judge permits her to testify. Through her testimony, Vinny wins an acquittal for his clients.

As for Absence of Malice, he sets the scene as follows:

No summary can do the final sequence justice; it must be seen to be fully experienced. As Gallagher’s efforts to “get even” begin to come to fruition, Wells convenes a meeting of all of those involved in the Gallagher affair—including the federal prosecutor, the district attorney (to whose campaign committee Gallagher has made anonymous contributions so as to cast doubt upon him), Carter and the newspaper’s lawyer—in an office conference room. The federal prosecutor attempts a mock cross-examination of Gallagher to prove his revenge scheme, but Wells takes over the meeting and queries Carter about her source into the investigation of Gallagher. Carter admits she received the information from the federal prosecutor, and following that admission, Wells—after commenting on the First Amendment and the purported reporter’s privilege—tells everyone where they now stand.

You’ll need to visit the ABA Journal‘s site to see the potential lessons from these films. You can read the Absence of Malice article here and the My Cousin Vinny article here.

By the way, we once tried to interview Mr. Brimley about his fateful scene, but alas, it was not in the cards. But it resulted in an interesting story about our attempts to do so, which you can revisit here.