In Smith v. Yamaha Motor Corporation, U.S.A., — A.2d —, 2010 WL 3239476 (Pa. Super. Ct. Aug. 18, 2010), an appeals court in Pennsylvania considered whether a trial court erred in granting summary judgment to Yamaha on claims of negligence and strict liability, and whether it erred by striking the report of Plaintiffs’ accident reconstruction expert in its entirety.

On September 23, 1999, Jeffrey Smith, an experienced ATV rider, was attempting to back his Yamaha ATV, more specifically a 1987 Yamaha Big Bear 350, down a hill when his foot slipped and struck the right-rear fender of the ATV. The fender collapsed, and his right leg became trapped between the frame and the wheel. The ATV then rolled back over Mr. Smith, causing him to suffer severe injuries that left him disabled and disfigured. According to the website, this ATV was Yamaha’s first 4×4 ATV: 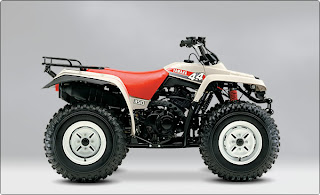 Mr. Smith and his wife, Susan, sued Yamaha under theories of strict liability, negligence, and breach of warranty, and claimed that the rear fender and instrument panel were defective. Yamaha answered, and asserted that Mr. Smith was contributorily negligent by trying to back the ATV down the hill, and by consuming alcohol (Mr. Smith’s BAC was 75% below the legal limit) and taking drugs (he was ingesting prescription OxyContin for a degenerative back condition).
Yamaha’s motion for summary judgment as to Plaintiffs’ strict liability claims was granted on the grounds that Plaintiff was misusing the ATV at the time of the accident because the ATV manual, which Plaintiff acknowledged receiving, warned against consuming drugs or alcohol in connection with using the ATV, and also counseled against letting the ATV roll backwards on a hill. By doing all of these things, Yamaha argued, Mr. Smith was “operating the vehicle in an unintended manner” (emphasis added). Yamaha’s motion for summary judgment as to Plaintiffs’ claims for negligence was also granted, as was its motion to strike the expert report of Plaintiffs’ accident reconstruction expert, because it raised a new theory of recovery after the statute of limitations had expired.
The appellate court reversed the trial court’s striking of the expert’s report in its entirety, holding that even though part of the report did raise a new recovery theory following the statute of limitation’s expiration, the remainder of the report did not and, therefore, the offending portion should merely have been redacted. The expert, therefore, should have been allowed to propound his theories about the defectiveness of the design of the fender and the availability of alternative designs that would have prevented Plaintiff’s injuries.
With this part of the expert’s report back in evidence, Plaintiffs’ claims under the negligence theory were once again viable. The expert was allowed to opine that Yamaha’s design did not meet the state of the art at the time of design and manufacture of ATVs. The appellate court, therefore, reversed the trial court’s decision to grant Yamaha’s summary judgment motion on Plaintiffs’ negligence claims.
The most instructive portion of this decision, however, was the appellate court’s decision to reverse the granting of Yamaha’s motion for summary judgment on Plaintiffs’ strict liability claims. In doing so, the court explained that “the trial court conflated the doctrine of unintended use with the concept of misuse” (emphasis added). According to the appellate court, Plaintiff was indeed operating the ATV for its intended use–off-road riding. What he may have been doing, however, was misusing the vehicle by operating it in a manner not intended by the manufacturer–backwards and potentially under the influence of drugs and alcohol. Finally:

It is well-settled that a plaintiff’s misuse of a product cannot be grounds for granting summary judgment in favor of the manufacturer under a design defect theory unless it is established that the misuse solely caused the accident while the design defect did not contribute to it.

Because the evidence of Plaintiff’s riding on the date of the accident went to the issue of misuse, rather than unintended use, and because there was evidence that a design defect may have caused or at least contributed to the accident, the trial court’s grant of summary judgment was reversed.
posted by Frances Zacher
Post the first comment
Tags: Design Defect, Expert Witnesses, Failure to Warn, Pennsylvania