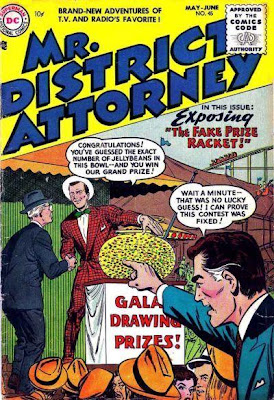 We here at Abnormal Use long for the days depicted in the above comic book cover when district attorneys and prosecutors faced their most serious duties at the local carnival. Yes, that is the title character, Mr. District Attorney, on the cover of Mr. District Attorney #45, challenging a carnival game. (We think perhaps the D.A. may be making himself a witness, and thereby precluding his role as advocate in the subsequent prosecution, by throwing himself into the field and attempting to thwart the scam as it is being perpetrated.).

Walter Olson reports at Overlawyered that France is outlawing “psychological violence.” We here are not fans of that, but we wonder, in the wake of such a law, how will partners at French law firms attempt to motivate associates?

According to the New York Times ArtsBeat blog, the classic rock band Led Zeppelin is being sued for copyright infringement over its 40 year old song, “Dazed and Confused.” We hope defense counsel in that suit, in pleading its statute of limitations defense, quotes the song itself: “Defendant notes that Plaintiff has “[b]een dazed and confused for so long it’s not true.”

John A Day of the Day on Torts blog reports that the Tennessee Court of Appeals has printed photographs in one of its recent opinions. (Incidentally, just yesterday, Mr. Day remarked upon the suit against Google – brought by a woman who claimed that she walked blindly into traffic after following Google Maps – that we had previously analyzed here.).

To all our readers, we wish a safe and fun-filled holiday weekend.

Before you file your motion for recusal, you better be pretty sure of yourself. When you petition for a writ of mandamus to order the judge to recuse himself, well, you’d better be really sure of yourself. I’m not certain how the lawyers for Sherwin Williams are feeling right now, but, if you’re confident enough to file said motion and petition, then maybe you think a lot of yourself regardless of the circumstances. In In re Sherwin Williams Co., No. 10-1639, 2010 WL 2244119 (7th Cir. June 7, 2010) [pdf], Judge Lynn Adelman is still in the case, despite the best efforts of Sherwin Williams.

Sherwin Williams took issue with a law review article co-authored by Judge Adelman, discussing several Wisconsin cases, one of which extended risk-contribution theory to manufacturers of white lead carbonate pigment manufacturers. See Thomas ex rel. Gramling v. Mallett, 701 N.W.2d 523 (Wis. 2005) [pdf]. If a plaintiff can prove that her lead poisoning injuries were caused by such pigments, then the plaintiff can recover against a manufacturer of the pigments. Though the Wisconsin decision was heavily criticized, Judge Adelman pointed out in his article that the decision was consistent with the judicial power endowed to the court by the state constitution. Sherwin Williams, of course, is not a big fan of this extension of liability. At the time that Judge Adelman authored the article, there were no pigment cases before him, but I’m sure shortly after the case was docketed, counsel for Sherwin Williams started the internal debate to decide whether to file the motion for recusal.

I think defendants ought to be aggressive. Too many times, in too many cases, defendants make the easy decision to settle, but I’m not sure that this was the case to say to the Judge, “Judge, we think you’re not capable of being impartial, and please step aside.” There seems to be a jurisdictional issue, in that Thomas is a decision by the Wisconsin Supreme Court, and Judge Adelman, sitting in diversity, would have to follow the law as set out by that court. To that end, it’s not clear what Sherman Williams hoped to gain by this move. Had the case been reassigned, the judge would still have to apply the substantive law of Wisconsin.

Second, extrajudicial writing should be encouraged, for the benefit of the law and for insight into how that judge perceives certain areas of the law. As lawyers, we should want judges to write. After all, if judges didn’t write, what would Congress use to grill judicial appointees for days on end while accomplishing relatively little unearthing of opinions heretofore unknown? Or perhaps judges might have some insight into how the system might be made better.