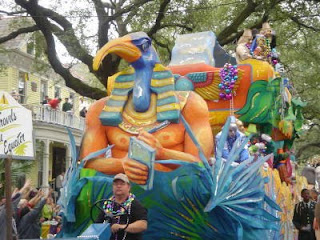 Obviously, we vet all posts here to an abnormal extent, seeking to bring you, our readers, content that is timely, thoughtful, and based on rigorous and bulletproof analysis. Because of this tireless dedication to the truth, we need to set the record straight on a subject of great importance to us all: Mardi Gras.

Fellow blogger Brett Burlison runs a plaintiff-oriented blog in San Francisco, and he recently authored a post entitled “Product Liability Gets More Difficult.” The post is reproduced below:

Let’s say you decide to head south and enjoy Mardi Gras. But let’s also say that you have the unfortunate distinction of being harmed by a float. Maybe the float collapses and falls on you or maybe you suffer personal injuries due to one of the vehicles in the parade.

In any event you’re injured. You would think that there would be laws that protect you and other injury victims like you in such a situation and that make sure you are adequately compensated for your injuries – made whole.

Well, not so fast – the legislature in Louisiana is considering a bill that would actually make it harder for injury victims to be compensated if they are harmed at Mardi Gras. According to media reports, a bill has been introduced by a state representative from New Orleans that would require proof of gross negligence or a deliberate act in order to hold a company that makes floats for Mardi Gras liable for damages due to injuries of death.Two years ago an individual was crushed by a float that was defective. Advocates for injury victims believe that the bill has been introduced to simply shield float manufactures from liability for future similar events.

That’s not really the case. As reported here, and as evident from the language of the bill, the limitation of liability does not extend “to any claim or cause of action against a manufacturer or lessor for damages arising from the failure in the design, manufacture, or maintenance of the trailer or float.” H.B. 902, 2010 Reg. Sess. (La. 2010). Rest assured that, were you to be injured by a float, your products liability action would be available, although I’m not sure how to define the “user” of a float.

Apparently there was some confusion as to the scope of the bill, with the bill’s sponsor merely wanting to limit the filing of frivolous lawsuits, i.e., potential plaintiffs severely injured by beads thrown from the float. But there is some question about a constituent of the bill’s sponsor benefiting from the bill. As an example of the type of lawsuits filed, see the New Orleans Metro Crime and Courts News, discussing the appeal of a case of a woman injured by a flying coconut. She claimed injuries including a cut to the forehead, a loss of interest in Mardi Gras, and “nightmares of airborne coconuts.” Apparently, in the olden days of Mardi Gras, persons riding on the float could hurl the coconuts at onlookers and be protected from ordinary negligence. Although the coconut crowd has adopted a tamer, “handing out” policy, other groups still toss “missiles” such as beads, cups, and doubloons from their floats.

On the legal side, surely this move is motivated to protect Mardi Gras from Lousiana’s system of pure comparative negligence, where any drunken reveler in any other setting may run up defense costs and potentially obtain a recovery even if he is 99 percent negligent in causing his own injury. (The coconut article notes the tens of thousands in legal fees spent solely by one group in defense of claims). Nevertheless, if you choose to attend Mardi Gras, beware of flying objects, and plan out your legal theory about how you were using a float at the time of your injury.