What Does Society Demand from a Chicken Sandwich? 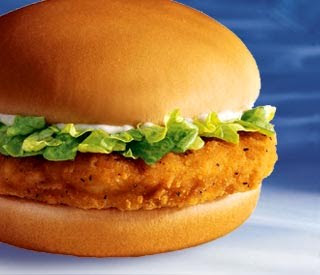 In my recollection of first-year Torts, I remember no case in which a chicken sandwich was a dangerous instrumentality. But the law evolves. It changes. The chicken sandwich is not immune to the whims and caprices of history, nor shall it remain untouched by shifts in the jurisprudential landscape. The time of the chicken sandwich is upon us. In Sutton v. Roth, L.L.C., No. 08-1914, 2010 WL 235143 (4th Cir. Jan. 21, 2010) [PDF], a divided panel reversed the district court’s grant of summary judgment on injuries sustained when a consumer ate a freshly-cooked chicken sandwich. We very briefly noted this opinion in an earlier post, but we did not fully explore the seismic shift in the law that this case affords for the chicken sandwich.

It was August of 2005 when Mr. Sutton’s brush with history occurred. His problems began when he thought it would be a good idea to eat at a Duffield, Virginia gas station at 1:30 a.m. (If that’s not assumption of risk, what is?). Sutton and three others (or the “entourage” as suggested by the Court) noticed the fabled golden arches (a McDonald’s attached to the truck stop) and thereupon entered the “restaurant/convenience store.” Initially, it appeared that the McDonald’s franchise was closed. Not to be deterred, Mr. Sutton scoured the lot and found the McDonald’s employees assembled outside. Surely because the McRib was not in season, Sutton ordered a fried chicken sandwich. If only the McRib had been available; what a cruel mistress is history for denying him the McRib that fateful evening. However, Mr. Sutton, or perhaps the fates themselves on his behalf, chose a chicken sandwich. It was to be his undoing.

When Sutton bit into his sandwich, he immediately regretted his decision, for untold “grease flew all over [his] mouth.” Grease coated his lips and chin, and blisters formed immediately. Mr. Sutton found the McDonald’s employees (who were once again outside, doing whatever restaurant employees do outside their place of employment in the wee hours of the night). One of them attempted to defuse this tense customer relations moment with the following statement: “This is what happens to the sandwiches when they aren’t drained completely.” Id. Momentarily satisfied, Sutton and his “entourage” left the station, “[a]fter they finished eating.” Id. Within the next two days, Sutton realized that his injuries were more serious than he thought and sought out a doctor. Months later, Sutton saw a second doctor who treated him with lip balm. He then filed suit and demanded $2 million in his complaint. (One suspects that some associate somewhere had the unenviable task of drafting a memorandum as to whether properly draining later chicken sandwiches constituted inadmissible subsequent remedial measures.).

The district court granted summary judgment for McDonald’s and judgment as a matter of law to the franchisee. Really, the main issue of the ensuing appeal was the district court’s exclusion of the employee’s statement. The Fourth Circuit reversed the exclusion finding abuse of discretion, and ruled that the statement was admissible as a statement by a party-opponent under Federal Rule of Evidence 801(d)(2)(D). After all, the declarant was wearing a McDonald’s uniform, with other sufficient indicia of agency to bind the employer. Moreover, the appellate court found that the exclusion of the statement was harmful error because it evinced a standard of care. The panel also rejected the district court’s sua sponte act of finding Sutton contributorily negligent for “biting into the hot sandwich.” I would tend to agree with the district court, looking to the surrounding circumstances of voluntarily eating an early morning meal at a gas station as assumption of a known risk. However, the panel reversed the grant of summary judgment and ordered additional discovery.

On a jurisprudential note, it’s interesting how injuries from hot food or drink have entered the realm of compensable injury. Society has apparently come to accept the Goldilocks theory of liability, where all food must be served at the precisely “right” temperature. The hot coffee cases used to be laughable, but not anymore. The next time you find yourself at a restaurant or convenience store well past the witching hour, consider any claims you may have under negligence and the warranty of merchantability. Rest assured, whatever their merits, you may be entitled to a trial. Above all else, though, ensure that your chicken is properly drained.