In Employment Case, Texas Trial Court Holds That Retweets Are, In Fact, Endorsements As A Matter Of Law 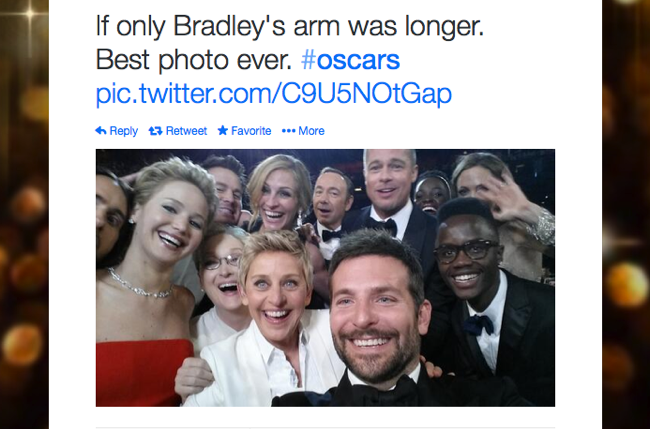 As you know, we here at Abnormal Use adore Twitter, and we often write about the perils of social media in litigation. That said, we were a bit unprepared for the trial court’s summary judgment ruling in Frost v. New Public News, L.L.C, No. 2014-CV-12052 (21st District Court of Harris County, Texas, April 1, 2014). In that case, a Harris County, Texas district court judge held that retweets are, in fact, endorsements as a matter of law.

Some background (from the court’s summary judgment order): Houstonian Elliott Frost served as the entertainment editor of The New Public News, one of those alternative news weeklies found in large metropolitan areas. As such, he reviewed films, authored record reviews, and generally commented upon the slings and arrows of the local and national entertainment industry. Just a few weeks ago, on Oscar night, when Academy Awards host Ellen Degeneres asked viewers to retweet her now infamous Hollywood selfie, Frost dutifully complied with the request from his official Twitter account. He later stated that he “only did so ironically, you know, because who still watches the Oscars in any other way?” The following day, the paper’s executive editor, Charles Cain, terminated Frost, noting that by retweeting Ellen’s selfie, he had endorsed it, thereby making a mockery of the paper’s “removed – and bemused – detachment from that which we cover.” Frost’s Twitter account was closely associated with and used to promote his work at The New Public News, and his Twitter biography identified him as the publication’s entertainment editor. However, the last sentence of his Twitter biography read: “Retweets ≠ endorsements.” See In re Application of the U.S. for an Order Pursuant to 18 U.S.C. |2703(d), 830 F.Supp.2d 114, 118 (E.D. Va. 2011) (“In addition to posting their own tweets, users may send messages to a single user (‘direct messages’) or repost other users’ tweets (‘retweet’)”).

Almost immediately after his firing, Frost retained an attorney and filed a lawsuit alleging wrongful termination in violation of public policy, intentional infliction of emotional distress, and the novel alienation of reputation cause of action (based on Frost’s belief that the paper’s characterizations of his actions had made him “seem uncool,” thereby depriving him of the benefits of his carefully constructed facade.). For its part, the defendant answered, asserting various affirmative defenses, but relying principally on the notion that Frost’s retweet was, in fact, an endorsement and inconsistent with the paper’s editorial philosophy. The parties submitted cross motions for summary judgment and a hearing was held early last week. (When asked about the great speed of this litigation, which went from the filing of a petition all the way to a summary judgment hearing in a matter of weeks, both parties replied that celerity was necessary to resolve the dispute before coverage of the twentieth anniversary of the death of Kurt Cobain could begin.).

In an affidavit submitted with his motion for summary judgment, Frost presented evidence of a storied career in journalism, which began a decade ago as a cub reporter for the Hill Valley Telegraph and a brief stint at the music desk of the New York Inquirer. He chronicled his long history of film and record reviews and noted that he always made certain to disdain a once subversive artist or director just at the precise moment he or she verged on mainstream success. Cain, in his own affidavit, noted that promoting the “commercial villains of Hollywood” via retweet was a “cardinal sin of the alt-newsweekly” and that the only commentary required of the Oscars this year was “the expression of woe at the death of Philip Seymour Hoffman.” Cain concluded: “When it comes to preserving our publications indie street cred, we simply cannot permit a managerial level employee to foster good will for or approval of the antics of mainstream Hollywood actors.” (Despite Cain’s affidavit testimony, Frost’s lawyer noted at the hearing that Cain is a big fan of “House of Cards,” featuring Kevin Spacey, who is prominently featured in the photograph which was the subject of the retweet in question. “[Cain] binge watched that show the second it was uploaded to Netflix,” Frost’s lawyer claimed.).

The trial court sided with the newspaper employer.  In its order granting summary judgment for the defendant, the trial court noted that the central issue in the case was the “status of the retweet.” Relying in part on Texas Rule of Evidence 801(e)(2), which provides that a statement is not hearsay if it is “offered against a party and is a statement which the party has manifested an adoption or belief in its truth,” the trial referenced, by analogy, the long tradition in the courts of finding that another’s statement was adopted by the declarant. He also turned to the plain meaning of the word “retweet,” and in so doing, examined the dictionary definitions of certain terms:

Webster’s Dictionary defines “tweet” as “a chirping noise,” while Dictionary.com tells us that the prefix “re-” “occur[s] originally in loanwords from Latin, [and is] used with the meaning ‘again’ or ‘again and again’ to indicate repetition . . . .” By retweeting the tweet of Ms. Degeneres, Plaintiff promoted her statement “again,” thereby adopting it as his own and rendering his purported disclaimer ineffective. Once Plaintiff formally adopted a statement which stood in stark contrast to the editorial mission of his employer, the Defendant was empowered to act and terminate his employment. Under the facts of this case, the termination was not, and could not be, in violation of Texas public policy. See Lovecraft v. Zuckerburg, 645 S.W.3d 173, 175 (Tex. App. – Austin 2011, pet. denied) (noting that once a Facebook user “likes” a status, comment, or photograph on Facebook, said user is estopped from contending that he or she dislikes it); In re: Friendster Litig., 567 F. Supp. 2d. 13 (D.S.C. 2004) ( “One is bound by one’s admissions on social media. Always.”); Cf. Appian Way, Co. v. Caecillius, Inc., 143 S.W.3d 521, 525 (Tex. App. – Houston [14th Dist.] 1997, no pet. h.) (noting that in cases involving the interpretation of Latin prefixes greater weight is always given to the party defending the claims at issue). As for Plaintiff’s argument that his Twitter biography rebutted any presumption of endorsement, the court need only look to the Texas Civil Practices & Remedies Code, which expressly states that any purported liability waiver containing the “≠” symbol is void under Texas law. See Tex. Civ. Prac & Rem. Code § 175.001, et. seq. Thus, we are forced to construe the Twitter biography as if there was no such attempt at waiver.

The Plaintiff has already announced his plan to appeal, and his attorney contends that they may petition the intermediate courts for a writ of mandamus to ensure that Frost returns to work and oversees any Cobain anniversary coverage.