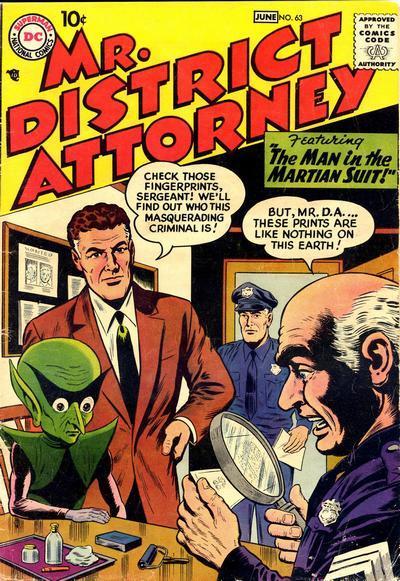 Above, behold the cover of Mr. District Attorney #63, published way, way back in 1958.  Note that the cover story is entitled “The Man in the Martian Suit,” which suggests something about the events depicted upon the cover.  Our hero, the district attorney, presents himself and the presumably costumed crook to the police fingerprint desk.  Says the DA: “Check those fingerprints, sergeant! We’ll find out who this masquerading criminal is!”  Replies the sergeant: “But, Mr. D.A. . . . These prints are like nothing on this Earth!” You would think that the district attorney, in apprehending the “man in the Martian suit,” would have removed the Martian suit from the suspect before presenting him to the police sergeant for print.  Or, if the suit was, in fact, not a suit, but the exterior of an extra-terrestrial, you’d think the D.A. would have figured it out before this point in the criminal process, too.  Sigh.

Friend of the blog Max Kennerly, of the Litigation & Trial law blog has an interesting post: “How To Excel At The Basics As A Young Litigator.” Complete with Robert Caro references! You can follow Max on Twitter here.

We are disappointed to report that friend of the bog Stephen J. McConnell has announced his retirement – temporary, hopefully – from the famed Drug and Device Law blog.  You can read his last post – published past Monday – here.  Through our blogs, we’ve become pals with Steve, and he very recently participated in our collection of “My Cousin Vinny” reviews. Although our two blogs have previously quibbled on musical issues, we once joined forces to compile a huge list of songs about lawyers, judges, and attorneys, which was an immense amount of fun. We even quoted Steve in a prior edition of Friday Links on the occasion of the death of Clarence Clemons. In the mean time, Jim Beck and company will continue to provide sharp commentary on the drug and device beat.  We’ll miss you, Steve.