Someone has made a federal case out of Siri. Friend of the blog Kevin Underhill, author of the very funny Lowering the Bar legal humor blog, directs our attention to a new proposed class action in which “a New York man alleges that the virtual assistant Apple built into his iPhone 4S doesn’t work as advertised.” (See Kevin’s post “Lawsuit Claims Siri Doesn’t Know What She’s Talking About,” March 30, 2012).  The plaintiff filed his suit in federal court in California.

Wikipedia tells us that Siri is a “is an intelligent personal assistant and knowledge navigator which works as an application for Apple’s iOS.” Kevin quotes the complaint (available online here): “For instance, when Plaintiff asked Siri for directions to a certain place, or to locate a store, Siri either did not understand what Plaintiff was asking, or, after a very long wait time, responded with the wrong answer. . . . Upon information and belief, Plaintiff’s problems with Siri are not unique . . . .” In his post, Kevin scrutinizes the distinction between Plaintiff’s claim that he was “exposed” to Apple’s alleged marketing misrepresentations and the traditional legal requirement that one must have “relied” upon misrepresentations in order to recover in such a lawsuit.

Concludes Kevin: “You do have to wonder if Siri will suddenly become especially good at finding things in the Northern District of California (San Jose Division), especially things that federal judges might need. Don’t do it, Siri. It’ll just look bad.”

We got to thinking about the discovery in this case.  Perhaps there will be some pre-certification interrogatories and requests for production.  But wouldn’t it be interesting if Siri, the most famous example of artificial intelligence, was deposed in the litigation?  We couldn’t wait, so we noticed that depo and began.

Of course, there are the formalities which must be addressed: 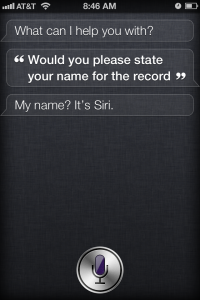 Even artificial deponents must be sworn, right? 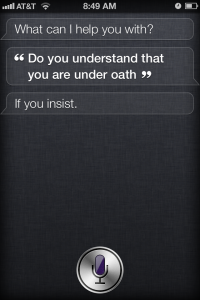 We have found that a little background questioning is always appropriate: 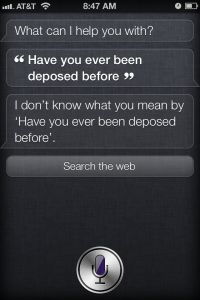 That may sound like an error, but a lot of witnesses ask for clarification on that question, not being familiar with the process.

Of course, sometimes it’s best to just cut to the chase and get straight to the allegations in the lawsuit.

“I’ve never really thought about it?” An interesting concession!

Let’s go in for the kill! 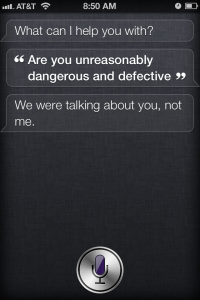 Ouch! Maybe this wasn’t such a good idea after all.

(Oh, and see Kevin’s follow-up post on this type of litigation here.).