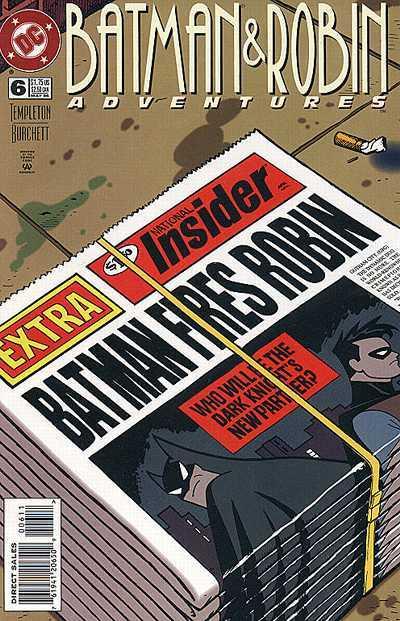 Behold, the cover of The Batman & Robin Adventures #6, published not so long ago in the halcyon days of 1996. But at that time, things were not going so well for the Boy Wonder.  The cover depicts a copy of a newspaper, The National Insider, the headline of which exclaims, “Batman Fires Robin.”  We wonder if Robin sought any advice from an employment lawyer following this report.  For one, who told the newspaper that Robin was fired? Surely not Batman.  Alfred, maybe? Perhaps there’s a potential defamation claim there.  We’re trying to imagine Robin completing a complaint and submitting it to the EEOC.  Can you imagine that pre-investigation mediation?

Friend of our blog Jeff Richardson, himself of the famed iPhone J.D. blog, notes that we are just a few days away from the release of the iPad 3.  Make certain you are reading Jeff’s site next week for all iPad related news.

Eric Goldman has a post over at the Technology & Marketing Law Blog that you’ve got to read to believe.  We know we say stuff like that all the time, but here’s the headline: “Facebook, Google and Lexis-Nexis Get 47 USC 230 Immunity in a Bizarre Case Involving a Missing Sex Toy–Gaston v. Facebook.” Um, okay. How about that? Let’s hope that one makes the case books some day.

The legal blogosphere is consumed with talk of the Washington, D.C. based federal judge who this week struck down the proposed federally required labels for cigarette packages.  As you will recall from our post here, the proposed new label were icky and gross. The district court basically agreed with our assessment.  See here for Findlaw’s Courtside blog’s post on this new development.

And, yes, if you must know, we here at Abnormal Use remain crestfallen that we were unable to catch the Radiohead concert last night in nearby Atlanta, Georgia. (Our editor has seen the band live four times!) We are recuperating – or attempting to – from this existential issue. Here’s the set list from last night, if you must know. Sigh.

This weekend will, however, be dedicated to another musical group, The Monkees.  As you know doubt heard, Monkee Davy Jones died this week in Florida at age 66.  Our thoughts and prayers are with his family. So, for the foreseeable future, we’ll definitely be listening to “Daydream Believer” and “A Little Bit Me, a Little Bit You” on repeat. Rest in peace, Mr. Jones.