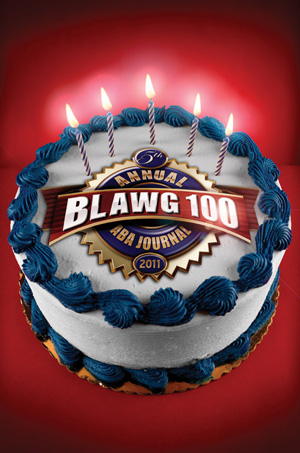 We are very honored to note that yesterday we received two prestigious awards in the legal blogsophere. First, we were named by the ABA Journal to this year’s ABA Blawg 100.  We’re very pleased to be included in the Torts category with such blogging greats as Eric Turkewitz of the New York Personal Injury Law Blog, Walter Olson of Overlawyered, Bill Marler of Marler Blog, J. Russell Jackson of Jackson on Consumer Class Actions & Mass Torts, and Jim Beck, Steve McConnell, and Will Sasche of the Drug and Device Law Blog. As you may recall, we were also named to this list last year, and one year later, we couldn’t be happier to be recognized in this fashion once more.  It was a big day yesterday here at AU HQ. 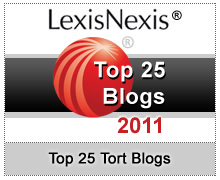 But that’s not all. We also learned today that Abnormal Use has been named one of the Top 25 Torts Blogs by the LexisNexis Litigation Resource Community.  We are in some prestigious company among those nominees, as well, and we’re very pleased and honored to be included as a part of that list, as well. As we said, it was a big day.

We’ll talk a bit more about these honors in this coming Monday’s post, but we wanted to take this opportunity to thank all of you, our dear readers, for your support. We plan to give you all another year of this blogging thing in 2012, and we’re looking forward to doing so. Special thanks must go out to our contributors Steve Buckingham, Nick Farr, and Frances Zacher, as well as alumni Mary Giorgi and Laura Simons. We simply could not do this without them. If you follow the links to both the ABA Journal and Lexis Nexis Litigation Resource Community’s pages, you’ll see that both sites are calling for votes for your favorites of those listed.  We’d very much appreciate it if you would consider us for that additional honor.

Subject change: Apparently, there is a rapper named “Lawyer Mike.”  See here for a video.

Quote of the week: “I’m very disappointed in the fact that somebody riding their bike in February crashes on the ice and gets $100,000. It absolutely reminds me of the case involving the lady who ordered hot coffee at a McDonald’s and spilled it on her lap. That’s pretty much it. You know it’s hot coffee when you order it. And you know riding a bike at night, in winter, is a little dangerous,” John Cornish, the president of the Florence Park District said in this piece by David Erickson of The Missoulian on November 29.