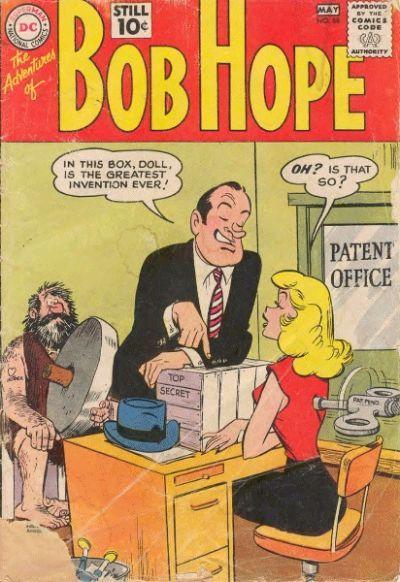 This is not an intellectual property blog, although we couldn’t resist sharing the cover of The Adventures of Bob Hope #68, published way, way back in 1961. Hope, the comedian and star of the eponymous comic book series, appears at the Patent Office with a crate labeled “Top Secret,” which he claims contains “the greatest invention ever.” This appears to upset the caveman sitting nearby his own invention, the wheel. Something tells us this is not an accurate depiction of the patent application process as it existed in the early 1960s.

Maxwell Kennerly of the Litigation and Trial blog has a very interesting post on “The Three Types of Practicing Lawyer Blogs.”  He divides law blogs by practicing lawyers into three categories: the mainstream, the personalities, and the marketers.  And guess what? He identified us as an example of a personality blog! Says he: “The personalities are the single lawyer or handful of lawyers who write when they’re inspired, and they’re written with a distinctive voice. These blogs can range from analysis of case law (e.g., Drug and Device Law, D & O Diary) to personal observations about law (e.g., Erik Turkewitz, Associate’s Mind, Day on Torts) to a mixture of both (e.g., China Law Blog, Abnormal Use) . When someone mentions the ‘blawgosphere,’ they’re usually talking about those blogs — not least because those blogs are far, far more likely to link out to other websites and to engage in discussion with one another. ‘Organic’ is an apt description.”  Check out the full post.  In it, Kennerly offers the wisest advice one can give to prospective law bloggers: “Don’t feel compelled to write a particular type of blog; write what you like to write and get good at it, or it will suck and you will hate it.” We just discovered the post last night, and we may offer a more substantive response in the coming weeks.  We love blogging about legal blogging, after all.

Did you know that yesterday was National Coffee Day? We’ve written much about hot coffee lawsuits this past year, but it all began with our Stella Liebeck McDonald’s Hot Coffee FAQ, which we published in January in an attempt to dispel myths about the infamous lawsuit.  In writing the piece, we relied only on the original sources, those being the actual pleadings and motions in the case, as well as some contemporary media coverage of the verdict and settlement from 1994.  To celebrate this week’s National Coffee Day, take a look back at that FAQ here.

Well, I guess we’re going to have to buy new iPhones now.

You’ve got to hand it to Steve McConnell at the Drug and Device Law Blog.  In a post he ran Monday, he begins a paragraph recounting his memories of Nirvana’s “Smells Like Teen Spirit” with a Sgt. Pepper reference! (“It was 20 years ago today,” begins the old Beatles song, and Nirvana’s most famous song appeared on the Nevermind album 20 years ago this month). And the post itself is about a new Seventh Circuit opinion on “the standard of review for a district court’s refusal to permit an amended complaint.”  How did he tie it all together, you may ask? The musical references are to songs with misheard lyrics, while the new Seventh Circuit case is about unintelligible allegations in a pleading.  Nice.