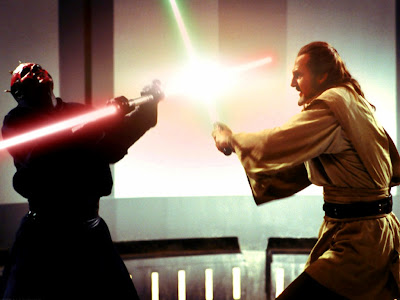 Although though we were perplexed to see a federal court address the issue, we can’t say we disagree with today’s opinion from the U.S. District Court for the Western District of South Carolina, which found that the three Star Wars prequels were “unreasonably dangerous and defective” as a matter of law. See Kurtz v. George Lucas, Lucasfilm Ltd., and Indus. Light & Magic, No. 2011-1138-THX (W.D.S.C. April 1, 2011). After hearing cross motions for summary judgment, the court denied the Lucas Defendants’ motion for summary judgment and granted the Plaintiff’s motion finding no genuine issue of material fact as to the films’ defects.

The facts were these: In 2007, Plaintiff Danny Kurtz found himself at his local video store in Seneca, South Carolina browsing through the racks of new DVDs. His young seven year old son, Milo, pleaded with his father to buy him some action movies. Dutifully acquiescing to the request, Plaintiff bought him the prequels: 1999’s The Phantom Menace, 2002’s Attack of the Clones, and 2005’s Revenge of Sith. At the time of the purchase, neither the Plaintiff nor his son had seen the films. (“Somehow, I made it through the last decade without seeing those movies,” the Plaintiff testified at his deposition, although he later acknowledged his familiarity with the films’ generally poor reviews.). Although the purchase was “against his better judgment,” he relented only because of the joy he felt his child might experience in being introduced to the Star Wars universe, a delight the Plaintiff recalled from his own youth in the early 1980s. After a marathon weekend viewing of all three prequels, the Plaintiff and his son experienced nausea, confusion, light-headnesses, shortness of breath, tinnitus, and a “foreboding sense of ennui.”

Plaintiff brought suit individually and on behalf of his minor son against George Lucas and several corporations, asserting various tort theories, including negligence and strict products liability. Plaintiff also asserted a novel “tortious interference with childhood memory” cause of action on his own behalf, arguing that the release of the prequels had destroyed his ability to reminisce his own younger days and his youthful enjoyment of popular culture. (The alienation of affection claims of Plaintiff’s spouse, Carrie, were settled for an undisclosed sum.).

In their joint answer, the Lucas Defendants asserted the affirmative defenses of contributory negligence, assumption of risk, unclean hands, and equitable estoppel, essentially arguing that Plaintiff knew or should have known of the films’ lack of artistic merit and was thus barred from asserting any tort claims based upon his viewing of same. See In re: The Last Airbender, 523 F. Supp. 2d. 147 (N.D. Ga. 2010); In re: Ishtar Litig., 111 F.2d 102 (9th Cir. 1988).

In denying the defense motion for summary judgment, the court rejected the Defendants’ reliance on In re: Bob Dylan Live Performance Litig., 867 F.3d 539 (S.D.N.Y 2006), in which that court held that a once talented artist can devolve and become so well known in the community as a disappointment that damages are not recoverable as a matter of law. See also Shyamalan v. United States, 543 F.3d 129 (6th Cir. 2008). In distinguishing Dylan, the South Carolina court observed that while Bob Dylan’s decline had been gradual over a period of years, the decay of the Star Wars franchise was sudden and immediate (and preceded by nearly two decades of engendered good will prior to the prequels’ release in 1999).

The court then granted the Plaintiff’s motion for summary judgment, noting in a single paragraph order that the films were “unreasonably dangerous and defective as a matter of law.”

The case is also notable for a few other procedural rulings made by the court: