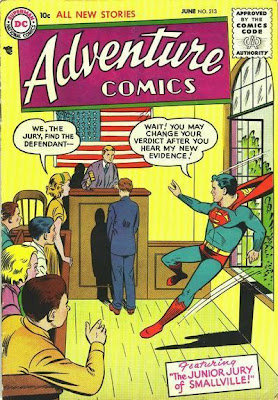 Above, you’ll find the cover of Adventure Comics #213, published way back in 1955. (Surely, George McFly read this issue.). Superboy, employing a tactic he would later utilize years later as Superman, flies in through the courtroom window at the precise moment that a verdict is to be delivered by the jury. The question: Is Superman moving for new trial? If so, why not wait until the jury has actually rendered its verdict? After all, the jury may well render the verdict Supes thinks the new evidence demands. And by the way, where’s the counsel table? Oh, well.

Speaking of comic books, last week, The New York Times Artsbeat blog reported that the world famous Comic-Con would remain in San Diego, California until at least 2015. We were hoping it would move here to Greenville, South Carolina. Alas.

The EvidenceProf Blog comments upon a recent opinion from the Tennessee Court of Criminal Appeals, which found that evidence of the defendant’s post crime purchase of a Superman t-shirt was admissible before the jury. There’s a motion in limine we would love to have written. Imagine all of the allusions that could have been placed therein!

Lawyerist has an interesting post about the utility of Twitter for attorneys. We’re still curious about the advantages of Twitter, both as lawyers and lawyer bloggers. If you look to the sidebar on the right hand side of your page, you can see our most recent tweets. Typically, though, we are simply alerting the Twittersphere to our current posts here. However, over the coming weeks, we do have a few exciting things planned for our Twitter account, including the possibility of some live tweeting from an upcoming legal conference.

Meanwhile, Eugene Volokh of The Volokh Conspiracy analyzes a recent opinion in which the Texas Court of Criminal Appeals found that a death row defendant’s conversion to Satanism was admissible in his death penalty retrial. Probably the right result there. (The EvidenceProf Blog also has a piece on this case here.).

Brian Peterson of the West Virginia Law Legal Weblog posts about a bankruptcy judge in Ohio who was so irked by the “document speaks for itself” objection that he has prohibited its usage in his court. This reminds of us of one of our law professors who was similarly annoyed by the “asked and answered” objection, which he insisted was a nonsensical “television objection.” The proper objection, he would tell us, is “repetitious.”