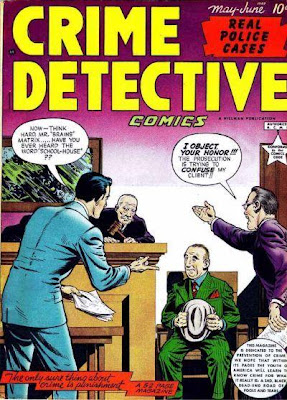 Today, Abnormal Use continues its series, “Abnormal Interviews,” in which this site will conduct brief interviews with law professors, practitioners and other commentators in the field. For our latest installment, we turn to lawyer and comic book collector Mark Zaid of The Law Office of Mark S. Zaid, P.C. in Washington, D.C. If you frequent this site on Fridays, you know that we occasionally – okay, perhaps more than occasionally – feature old comic book covers with legal themes accompanied by our commentary. In one such post, we mentioned Mr. Zaid when discussing a recent Yale Law School exhibit featuring comic books with courtroom covers. That exhibit, “Superheroes in Court! Lawyers, Law and Comic Books,” runs until December 16, 2010 and features much of Mr. Zaid’s collection. In fact, Mr. Zaid contributed so many comic books to the exhibit that he was asked to serve as its curator. Our interview with him is as follows:

1. How did you first become interested in collecting comic books with legal themed or courtroom covers? Do you remember the first one you saw or bought?

It was not too difficult or a stretch of any imagination to start collecting legal related comic books. I actually first started collecting comics with espionage titles or covers as my legal practice area is tied to the Intelligence Community. In essence, I represent spies, i.e., federal employees who work at agencies such as the CIA. At first I was seeking out comics that had legal connections to them such as ashcans (trademark submissions), Library of Congress deposit copies or books that had served as trial exhibits in litigation. As I simply perused through collections I had bought I started to see courtroom covers or titles involving attorneys and a light bulb appeared above my head and I realized that it was impossible for me not to collect this genre as well!

2. How did your interest in these types of comic books lead to the “Superheroes in Court! Lawyers, Law and Comic Books” exhibit at the Yale Law School Library?

Michael Widener, the Rare Book Librarian of Yale Law School, contacted me and invited me to serve as the curator of the exhibit. Apparently he had been asking around the community and one name continually cropped up as the person he should speak with: me. Of course, I jumped at the invitation. How could I resist the opportunity to combine my two passions: the law and comic books!

3. Do you see any consistent themes in the comic books’ portrayal of the legal system? If so, what have you noticed?

As far as character development goes, lawyers for the most part have been favorably portrayed over the decades. There are fortunately more super-heroes who have been lawyers than villains, although there have been our share of those as well. Comic books primarily, at least historically, reflect what is culturally popular in society at the time. Thus, at a time when Perry Mason dominated the television and radio airwaves it should not surprise anyone to see more legal scenes or characters emerge in comic books. But what I am particularly interested in is the impact lawyers have actually had on the comic book industry. Comic book characters, titles and even companies have been born or died because of the role that lawyers have played throughout the last century. It is incredible to truly evaluate the significance of lawyers in helping build the industry that exists today.

4. In our own blog posts featuring legal themed comic book covers, we’ve been surprised at the frequency of comic books artists’ usage of courtroom imagery. Why do you think they continue to return to those types of covers?

Again, I think the answer can be found in what is culturally popular in society at the time. Mr. District Attorney hit the radio airwaves in 1939. Comic books picked up on the character right afterwards. Just think of all the popular hit television/radio shows in every decade since then that have featured lawyers as the primary character if not served as the raison d’etre of the entire program. Comic books are simply following in those footsteps. 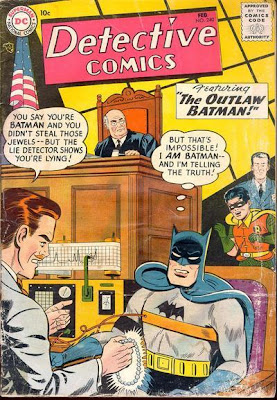 5. Of all the legal themed comic books you have collected, what is your favorite cover?

I don’t believe I really have a particular favorite, but I am certainly very partial to Detective Comics #240. It combines both a trial scene of Batman and the use of a polygraph machine. I sued the FBI, Secret Service and DEA over their use of pre-employment polygraph examinations and often handle polygraph challenges throughout the Intelligence, Law Enforcement and Military Communities. What makes the device so special is that the “father” of the modern day polygraph is William Marston. Under the pseudonym Charles Moulton, he created “Wonder Woman” whose magic lasso requires those bound by it to tell the truth. When I testified before the Senate Judiciary Committee in 2001 on the use of polygraphs, I noted how the device and Wonder Woman’s magic lasso shared one thing in common: they were both based on science fiction!

[Editor’s Note: We here at Abnormal Use previously discussed Detective Comics #240, the image of which can be found above, here.]

6. How do you find legal themed comic books covers?

I find the books through a variety of means, but primarily at comic book conventions and through auctions. My search for these books is fairly widely-known within corners of the community so many times other collectors/dealers point them out to me.

BIOGRAPHY: Mark S. Zaid practices in the areas of litigation and lobbying on matters relating to international transactions, torts and crimes, national security, foreign sovereign and diplomatic immunity, defamation and the Freedom of Information/Privacy Acts.

[Editor’s Note: The comic book cover at the top of this blog entry is that of Crime Detective Comics #8, published way back in 1948.]