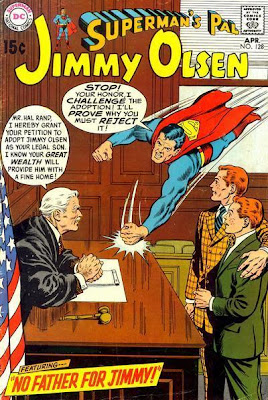 We here at Abnormal Use are not family lawyers, but we like to think that if we were, we would zealously conduct ourselves in the courtroom in the manner that Superman does above, on the cover of Superman’s Pal Jimmy Olsen #128, published way back in July of 1970. Note that the Man of Steel flies through the open courthouse window (apparently bypassing courthouse security) in order to object to archaeologist Hal Rand’s attempt to adopt Jimmy. (Since it’s obviously an adult adoption, perhaps Rand just wanted someone who would be able to inherit from him if he passed away.). Someone should probably tell Superman that banging one’s fist on the judge’s bench is probably ineffective, though. Jimmy apparently prefers great wealth and a fine home to Superman’s offer of a cold and lonely existence at the Fortress of Solitude. Or perhaps the social worker gave up on trying to make an in-home visit to Superman’s secret hideaway. In addition, apparently Superman had not developed his ability to reverse time in 1970. Why would a superhero of Superman’s caliber come flying in as the judge makes his ruling? Wouldn’t it be easier to arrive about ten minutes earlier and push Hal Rand in a great crevasse?

We love history and true crime. The Media LawProf Blog has published the abstract of Edward Larson recent piece in the American Journal of Legal History, “An American Tragedy: Retelling the Leopold-Loeb Story in Popular Culture.” The Leopold and Loeb crimes were the basis – for the most part – of Alfred Hitchcock’s stellar 1948 flick, Rope (which was apparently itself based upon a 1929 play by Patrick Hamilton).

Quote of the Week: “That sum, demanded by a Las Vegas man in a suit against three Utah attorneys, is far in excess of all the money in the world, so there may be collectibility problems,” Walter Olson, commenting here at Overlawyered, in response to news that a Plaintiff in a recent lawsuit has demanded $38 quadrillion. (The dispute apparently also involved a $918 billion lien.). Well, at least the amount in controversy is clear for removal purposes, eh?

Lawyerist reports on an interesting dust-up between an attorney blogger and LegalZoom.

Robin Wheeler at the South Carolina Access to Justice Weblog has a post entitled “Why I Do Pro Bono . . .”

The Litigation and Trial Blog has a nice post about the City of Philadelphia’s current attempts to apply its business privilege license requirements to local blogs. For the record, this blog is not, nor has it ever been, based out of Philadelphia.