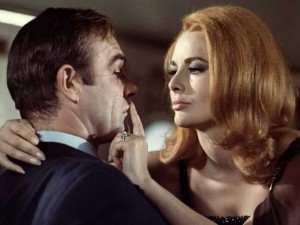 Movie goers are abuzz over the most recent installment of the James Bond franchise, Spectre. But who is James Bond? Apparently, the subject is up for debate.

In one case, in which the characteristics which make up James Bond were hotly contested, the Plaintiff pointed to various character traits specific to Bond, including “his cold-bloodedness; his overt sexuality; his love of martinis ‘shaken, not stirred;’ his marksmanship; his ‘license to kill’ and use of guns; his physical strength; his sophistication . . . .” Metro-Goldwyn-Mayer, Inc. v. Am. Honda Motor Co., 900 F. Supp. 1287, 1296 (C.D. Cal. 1995). At least one commentator has asked “[i]f James Bond is removed from international adventure and placed in a supermarket or an office-building with no villains to fight or women to seduce, would he still be the same character?” Samuel J. Coe, The Story of A Character: Establishing the Limits of Independent Copyright Protection for Literary Characters, 86 Chi.-Kent L. Rev. 1305, 1306 (2011). Differences aside, everyone can agree that Bond frequently seduces members of the opposite sex, and that he has done so quite prolifically over the course of his sixty year, 24 film career.

At least for Bond, there do not appear to have been any consequences to date for his behavior. If Bond would like that trend to continue, he should avoid the state of Mississippi.  Why Mississippi, you ask? In Mississippi, “[a]n unmarried female may prosecute an action for her own seduction, and recover damages.” Miss. Code. Ann. § 11-7-9; Mississippi Law of Damages § 19:3 (3d ed.). We know what you are thinking, that Bond can just stay out of trouble by only having social encounters with married women. Not so fast! In Mississippi, an aggrieved spouse can recover against a paramour for seducing the other spouse if he or she proves “(1) wrongful conduct of the defendant; (2) loss of affection or consortium; and (3) causal connection between such conduct and loss.” Carter v. Reddix, 115 So. 3d 851, 857 (Miss. Ct. App. 2012).   Unfortunately for Bond, his very essence is wrongful in Mississippi.

So, Bond would be wise to avoid Mississippi.  Otherwise, he risks paying some of his fortune to seducees, seducess suing in a representative capacity on behalf of similarly situated women, and/or spouses of seducees.