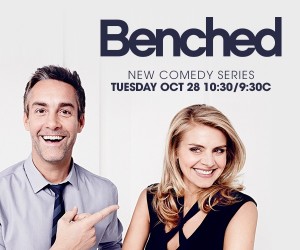 This past Tuesday night, the USA network aired the premiere episode of “Benched,” a new legally themed sitcom starring Eliza Coupe (“Happy Endings,” “Scrubs”) as an ex-corporate lawyer experiencing the trials and tribulations of life as a public defender. Created by Michaela Watkins and Damon Jones, “Benched” brings the fun back to the legal sitcom in ways many of its recent predecessors have failed.  While “Benched” is not a perfect depiction of the legal profession, lawyers, particularly those engaged in a criminal practice, will relate to the challenges faced by its PD protagonist.

Coupe plays Nina Whitley whose life as a prominent corporate attorney is derailed by a comedic in-office blow-up following her discovery that she failed to make partner.  Now plagued by the gossip surrounding her breakdown, Whitley finds herself with few employment options despite her impressive pedigree.  Reluctantly, she takes a job with the public defender’s office in an attempt to revamp her career, but in the process, rediscovers herself.

At least in the pilot, the focus is exclusively on Whitley and set primarily within the confines of the courtroom and the public defender’s office.  We assume, however, that the show may dive deeper into Whitley’s personal life in future episodes based on the groundwork set forth in the pilot.  Rounding out the cast are Jay Harrington as fellow public defender Phil Quinlan, Fred Melamed as Judge Don Nelson, Jolene Purdy as legal intern Micah, and Carter MacIntyre as Whitley’s ex-fiancé turned prosecutor Trent Barber.

The pilot sets the stage for Whitley’s career path.  Waiting to become the next partner at her law firm, Whitley discovers that the position has been given to her attractive yet less legally-qualified colleague.  Enraged by the news, Whitley unleashes an epic rant on her firm and co-workers which ends with her smashing a vase given to the firm by Sir Elton John himself.  Preceded by exaggerated rumors of her blow-up, Whitley emerges in the public defender’s office and immediately learns she is scheduled to be in court for numerous arraignment hearings five minutes later.  As if walking into court completely unprepared wasn’t bad enough, Whitley discovers that the prosecutor is none other than her ex-fiancé, now legal nemesis.  Frustrated after “losing” multiple requests for bail, Whitley finally uses her legal moxie to achieve having bail set at $1 for an alleged diaper thief, much to the chagrin of her nemesis.

We here at Abnormal Use are not criminal lawyers, and we certainly do not pretend to know the internal machinations of a public defender’s office.  “Benched” goes out of its way to create a stark contrast between the work environment of those in the public sector from the cozy confines of a big law firm.  Just as many shows exaggerate the perceived “luxuries” of the firm life, we assume “Benched” took similar liberties with the PD’s office.  We seriously doubt the typical PD’s office mirrors the chaotic confines of a debt collection call center.  Nonetheless, many of the portrayals of the difficulties faced by lawyers in the public sector are well-founded.  Too many files without the time or opportunity to work them up as much as the lawyer would prefer is not just a story made for Hollywood.  Yet, like Whitley, lawyers make it work.

At its roots, “Benched” is a comedy and Coupe will certainly make you laugh.  For lawyers, the show is more than just a half hour of comedic relief.  Whether or not the message was intended, “Benched” serves as an excellent reminder of what makes this profession so great. Regardless of a lawyer’s practice area, there will always be more work that can conceivably be addressed.  Yet, when the lights come on in the courtroom, the skills take over and lawyers find a way to make each case look like it is the only one on his or her radar.  Like any great lawyer, Whitley finds a way to thrive in the face of insurmountable odds.  While the general public will love Coupe as an actor, lawyers will love Whitley as an attorney.  Sure, “Benched” takes some artistic liberties with the legal profession, but lawyers will certainly be able to relate to its shenanigans.