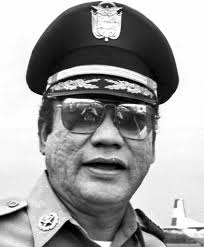 We recently blogged about troubled actress Lindsay Lohan’s lawsuit against a video game creator who allegedly misappropriated her likeness and used it for profit.  Apparently, she is not the only public figure who has been recently targeted by a video game company.  Reportedly, former Panamanian dictator, Manuel Noriega, has filed suit in California state court against video game creator Activision Blizzard for using his likeness in Call of Duty: Black Ops II.  Noriega is apparently the subject of various fictional missions within the video game that include historical footage and “real-life characters in Cold War scenarios, including Oliver North.”

Noriega, who is currently serving out a prison sentence in Panama for “drug trafficking, money laundering, and killing political opponents,” alleges in his lawsuit that, among other things, the defendant “damaged his reputation” by portraying him “as a kidnapper, murderer, and enemy of the state.”  For these alleged wrongs, Noriega seeks damages, to include a share of the profits from sales of the video game. He also demanded a jury trial!

Now, quite frankly, this is a deposition that we would like to see (assuming that the case makes it to the discovery phase and that Noriega, currently a prisoner in Panama, testifies in any way, shape, or form). We’re amused that in his Complaint, in the “Parties” section, Noriega mentions that he is “an individual residing in Gamboa, Panama,” without referencing that he is, in fact, in prison. If he is deposed, we would ask that defense counsel please question him about the punk rock and heavy metal music that was played during Operation Nifty Package back in the day. But that’s just us. Oh, and here is the complaint if you would like to read it.

An unrelated confession: The Activision game our editor played was Pitfall! for the Atari 2600.