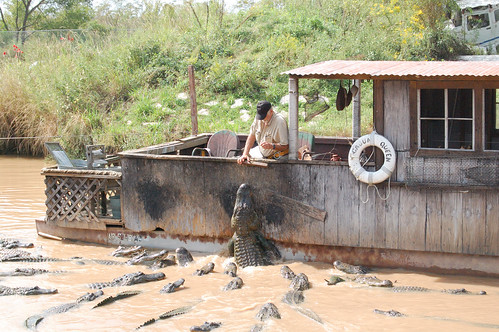 Let us begin by saying the facts of this Mississippi “wild alligator nuisance case” (as described by the Mississippi Supreme Court) are truly terrifying and are basically a reptilian nightmare. Tom and Consandra Christmas purchased a tract of land adjoining a waste disposal site owned by Exxon.  They later discovered that Exxon’s property contained EIGHTY-FOUR ALLIGATORS.  As it turns out, the Mississippi agency responsible for regulating wild alligators investigated the infestation and concluded that this was “a high density of alligators to exist in the wild.”  We here at Abnormal Use thankfully do not have a tremendous amount of experience with alligators, but it appears that the agency’s observation was astute.

Allegedly, some of these alligators were spilling over onto the land owned by the Christmases, so the Christmases filed suit against Exxon, seeking monetary damages for the nuisance created by the alligators.  The trial court granted summary judgment based on the statute of limitations and the prior trespass doctrine, but the Mississippi Court of Appeals reversed and remanded.  The Mississippi Supreme Court reversed the Court of Appeals and affirmed the trial court, but on different grounds.

Was this the correct result?  We at Abnormal Use decline the opportunity to weigh in on the holding, but one thing is for sure – we would probably find somewhere to live besides property adjacent to an alligator infested waste disposal site.  That, or we would erect an elaborate electrified fence system to keep those prehistoric, toothy creatures on Exxon’s property.