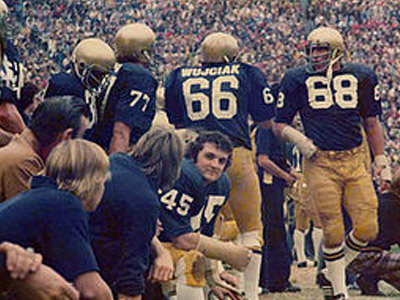 Today, we here at Abnormal Use continue our  tribute to the 1993 film Rudy and celebrate its twentieth anniversary with a special edition of “Abnormal Interviews.” For this latest installment, we turn to motivational speaker and former Notre Dame college football player Daniel “Rudy” Ruettiger, the inspirational figure behind the film.  That’s right.  The Rudy Ruettiger.  You know, the Rudy Ruettiger, who despite his 5’6″, 185 pound stature,  walked-on to the storied Notre Dame football team from 1974-1975 back in an era when walk-ons were much less common place than they are today.  Yes, that Rudy. Rudy’s story, as told in the film, has served as an inspiration to many.  After speaking with Rudy for just a short time, we quickly learned that his story is more than a made-for-Hollywood tale.  Rudy is as inspirational to interview as his film is to watch and made us feel as if we should pull that brief back off of the partner’s desk and add a few more citations just to spice it up.  Without further ado, the interview is as follows:

NICK FARR:  Looking back now twenty years,  what are your thoughts on how the film has resonated with viewers?

RUDY RUETTIGER:  It’s interesting, it’s affected people spiritually in a big way because of the message of – nondenominational message, not a religious message, it’s a spiritual message of not giving up, getting up when you get hit hard, keep moving forward, don’t listen to the naysayers, persevere, be persistent.  That’s the message that comes through loud and clear through the movie.  In the last twenty years, I’ve heard many stories how the movie has really helped people.   One guy came up to me that had cancer and he used to the movie to get himself in a positive state of mind to help get himself cured.  You hear all these stories  you hear of kids hav[ing] misfortune, families hav[ing] misfortune and they use the movie wording to encourage them.  To me, the movie worked as I saw it.  The movie worked as I presented it to Hollywood and Notre Dame.  It wasn’t solely about me.  It was more about the journey of life, how we look at life, how we can changes our thoughts, our thoughts control who we are, so that type of thing.

NF:  How did the movie come to life?  How did you feel once you saw a representation of your life on the big screen?

RR:  I got my inspiration through a movie that I watched called Rocky. It inspired me  to do other movies like that. Where they needed to go I thought Notre Dame would be such an elite status in America for sports and academics and you break through that.  That’s an underdog story.  So I went out to Hollywood and started pitching that.  It took ten years to find – well, eight years to find someone to listen and in the ninth year, we started the process and the tenth year we got the okay to produce the movie through a company, Tri Star Pictures Columbia Pictures.  We went through a series of mistakes and misfortunes. . . . Notre Dame was a challenge.  They didn’t want Hollywood to come in. . . . Very, very, very tough sell, but it all came together at the end.  I think God has a special way of putting things together when you do the right stuff even though you make a lot of mistakes, you learn something.  You don’t live by them you learn from them and you move on.  And I think that’s how the movie happened.

NF:  With your story personally, starting out at Holy Cross, finding your way onto the scout team at Notre Dame, and being a “undersized player”, what was your source of motivation throughout that whole process.

Rudy: That’s a good question.  I entered the Navy after high school. [The Navy] changed my whole environment, my whole attitude of life basically because it –  I didn’t know I had a learning disorder, I was kinda put down, kinda bullied.  I was put in the category of the dumb kid.  To make a long story short, I chose to go into the United States Navy, I changed my whole attitude about who I was and had confidence.  And from there I went back to work . . . I didn’t know how to pursue Notre Dame even though that dream came back.  Holy Cross was the answer.  I never went to the people, my high school counselors . . . . I went to other people who believed in me.  They said Rudy that’s a great choice  A junior college is a great choice. You go there because at a junior college great people come around you.  They want you to win.  You succeed academically and then you transfer. It’s right across the street.  And that little junior college was exposed to me just by chance.  By chance for the first time in my life I went up to the Notre Dame football game, never had a ticket.  And I saw the junior college and said there’s my answer.  It’s right there.  So that’s kinda like it all happened and from a junior college of course I made the decision not to be a scholarship player but to be part of a football tradition.  So that changed my whole attitude.  I could be part of something.  I don’t have to start.  I don’t have to do all the things they say I need to do other than contribute to that football team.  And that was a realistic choice because that was real.  I go through a lot of disappointment of course and a lot of alienation because you’re dealing with elite coaches, elite culture, elite outreach and they don’t accept walk-ons because there were 145 scholarships at the time.  And I understood that.  So I just used my Navy attitude —- do what you want, do what you need to get done.  Find a way to do it.  Because of that attitude, it happened.  By doing your work.  Do what’s important.  Showing up and everything falls in place.

NF:  Tell us a little bit about Coach Devine.  I know that some people have said that in the movie he is  portrayed as maybe the antagonist but we understand that may have not actually been the case.

RR:  Exactly, you’re absolutely right.  Coach Devine, we sat down with Coach Devine and the writer, and they started to explain to him why he had to be the heavy.  We had to do composites of other coaches and his personality because we wanted to show the real realism of college coaching and the politics.  He agreed to do that because he saw the benefit of a guy like a Rudy that could benefit a football team.  He said,  “Absolutely.”  Not that he completely understood it, but he accepted it, and again, because of the movie, once he saw it, he understood it, and he accepted it again.  It was a courageous move by him I thought for him to accept that role. And, of course, Ara Parseghian – same type of person but yet at the same time he was a tough guy, too.  He gave me a chance to walk on.  So, saying all that, as you know sports today – it’s still the same, it hasn’t changed.  Walk-ons are more accepted today because of lower scholarship demand.  And walk-ons still contribute.  So that changes everything and there’s a lot of athletes walk on and play baseball, football, national football, NBA.  And there’s great athletes that use the movie Rudy to inspire them to keep working harder. How important is that chip on your shoulder? Kobe Bryant is a great example because he uses that movie to inspire him to work hard.  Knowing that he has talent but will have to work hard even though he  gets knocked down you gotta get back up so he uses that movie. All these guys relate to that.  There’s guys in the NFL as well. . . . So my point is – my whole point is the movie p represented the underdog and you gotta show that conflict and that’s where he accepted.

NF:  How did you feel about Sean Astin portraying you on film?

RR:  Sean Astin was a perfect choice.  We were actually looking at another great actor by the name of Chris O’Donnell. He was under contract, but because of a movie I saw, it inspired me to call. Not that I was an expert on casting but I asked them if they would please look at Sean.  They liked him, and he got the role.  So, Sean Astin, basically, to make a long story short, made his career from Rudy. . . .

NF:  And you, yourself, made a cameo in the film.

RR:  Yeah, of course, you wanted to be part of that film so I wanted to do a cameo part.  But I was also encouraged by the director and the producers to do it.  I wanted to do it, why not?  When they made Secretariat, the lady who owns Secretariat, she made a cameo.  I think it’s important to make your cameos in movies like that.

NF:  Do you have a favorite sports movie?

RR:  I liked Remember The Titans.  I liked Hoosiers.  Rocky was my favorite, I think, of all.  I like Rocky Balboa.  I liked Secretariat.  The underdog type movie I think is what inspires me. . . . So saying all that and being part of all that – you put all that together and you tell yourself why not, why can’t I do it?  And that was the attitude I had.

NF:  One last question:  Do you have any predictions for the college football season this year?

RR:  Well, college football – you look at the heavyweights, your Alabamas, your Texas A&Ms, because of big quarterbacks.  I think Ohio State and maybe Alabama in the final.  That’s kinda the gut feeling I’m getting.  Who knows?  Great teams are upset, blindsided and they let their guard down.  But again, Southern Cal, Notre Dame, Ohio State, Michigan – all those teams – Wisconsin, great team.  Northwestern, I mean watching them come from where they were and where they’re at today – Ohio State, great team.  I mean, it’s just – shows you some great kids out there, great coaches, Coach Peterson is a great coach.  So there is – I love college football.  It’s exciting to me.  I love the playoffs for major league baseball in October.  I love it.  It’s just one of those things.

BIOGRAPHY: Daniel “Rudy” Ruettiger was born in Joliet, Illinois.   He spent one year in the United States Navy following high school.  Thereafter, he worked for a power plant before applying to Notre Dame.  Due to marginal grades, he completed his early college work at Holy Cross College before finally being accepted to Notre Dame in 1974.   Following his time at Notre Dame and the release of Rudy in 1993, Rudy has served as a motivational speaker, traveling the country inspiring others through his story of determination.  He can be found on Twitter at @TheRealRudy.