Guns and Products Liability in Alabama

Maybe I’m naive.  Maybe I just haven’t felt the need to carry a firearm for personal protection in my everyday life.  Maybe I’m just not from Alabama.  But this case confuses me. 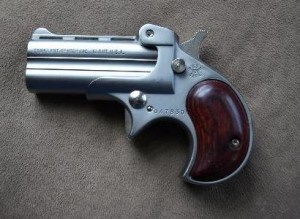 Now, you can guess where this is going.  One day, Avery returned home from running errands.  He got out of his car carrying not only the derringer (safety off), but magazines (the reading kind), wallet, keys, and soda bottles.  He got as far as the trashcan, but when he tried to open it, he dropped the gun.  The gun hit the ground and discharged, shooting Avery in the abdomen.

Avery sued Cobra Enterprises, the manufacturer of the derringer, asserting several theories of products liability; however, the only claim that survived to the summary judgment stage was a claim for breach of implied warranty of merchantability.  Under Alabama law, one of the requirements is that a product must be “fit for the ordinary purposes for which such goods are used.”

Avery’s lawyers did something clever with this claim after Cobra filed a motion for summary judgment.  They claimed that “ordinary purposes” include not only those uses intended by the manufacturer or seller, but those which are reasonably foreseeable.  Their argument is that the manufacturer of a firearm should have reasonably anticipated that a carrier of the derringer might need to fire the gun so quickly, that “a pause to disengage the two safety features [of the derringer] would destroy the defensive advantage he was buying.”

The Court basically called this out as the “wild west” argument, but unbelievably, denied Cobra’s motion for summary judgment, in part on this basis:

This is analogous to the reasoning of hair trigger artists of the Old West.  It may be an uphill battle for the Averys to convince a jury that there exists such a reasonable expectation, either by seller or by user, but on the current state of the evidence, the Averys will be afforded the opportunity to put their theory to the jury test.

Unbelievable.  One other point should be made about Avery, lest you think that he, like me, was simply naive about the way guns work and how they can be safely handled on an everyday basis:

Avery had experience with firearms throughout his life. He went hunting for the first time at age 6, used a pistol around age 8, handled a semi-automatic handgun around age 18, and has carried a pistol permit since the age of 18. He also served in the Navy where he received formal firearm training. He had experience both with firearms that have manual safeties and firearms that have no safeties at all. He had no experience with a derringer until he acquired the one at issue. Upon receiving any new firearm, he always examined it himself to figure out how it works, but he does not typically read the instruction manual right away. He said he “probably … looked over” the derringer’s manual at some point while he owned it. Avery July 18, 2012 depo at 53. He testified that he knew a firearm could discharge if mishandled, but he did not know that a firearm could be expected to discharge if dropped while fully loaded with the safety off.

I’ll withhold further commentary here, except to say that I hope that the jury gets a well drafted contributory negligence charge from the Court.  Sharpen your pencils, counselors.
posted by Frances Zacher
Comments (6)
Tags: Alabama