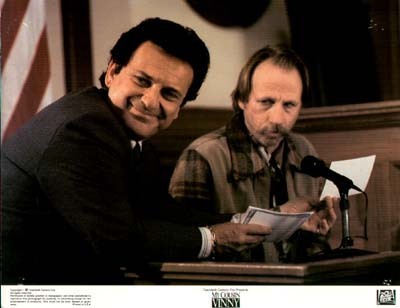 Today, we here at Abnormal Use continue our week-long tribute to My Cousin Vinny with a look at a couple of the film’s actors.  Today, we turn to our interview with Raynor Scheine, who was kind enough to agree to an interview with our own Nick Farr last year. In the film, Scheine’s character, Ernie Crane, was a part of one of the film’s most memorable courtroom scenes (and our personal favorite).  He is the eyewitness for the prosecution whose ability to see through a dirty window, trees, vegetation, and foliage is fodder for Vinny during cross examination. You can watch the clip of the scene here.  Scheine’s extensive credits include roles in Fried Green Tomatoes, Ace Ventura:  Pet Detective, and HBO’s “Deadwood.”  Our interview with Scheine, which features his memories of the filming and set and observations on his acting career, is as follows:

NICK FARR: Looking back, 20 years now, what are your thoughts on the film and how it was received as a courtroom or legal drama?

RAYNOR SCHEINE: Well, I thought it was just a perfect comedy in so many ways.  The script was just perfect.  When it would drag, then it would pop back up with something incredibly funny.  And Joe Pesci, and of course, Marisa Tomei won the Academy award.  She was wonderful.  Fred Gwynne was wonderful.  I had just done a play with him where he played a judge in New York.

NF: I believe “My Cousin Vinny” was Fred Gwynne’s last film appearance before he passed away.  How was it like to work with Fred?

RS: Oh, it was great.  He was very nice and a very smart man.  I think he graduated from Harvard, and he was a great guy.  I ran into him shortly after that in Greenwich Village where he lived, and he was a very nice man.

NF: How were you cast for the role of Ernie Crane?

RS: I auditioned like everybody else, and I had three scenes – two short scenes and then one longer scene. Each one was filmed in a different week, so I was in Atlanta, Georgia for three weeks, which was nice.  We filmed all around outside Atlanta, and I think we filmed on the same courtroom set that they used for “In the Heat of the Night.”

NF: How did you prepare for the role?

RS: Well, most of my background has been in comedy, so I just was funny.  It wasn’t too hard to prepare.  I just had to be funny.  I’ve been funny all my life. . . .  The two of us [Joe Pesci and Raynor Scheine] together.  Joe Pesci’s a great comedian, and the two of us together.  When they would ask me questions, he’d say, “Just go ahead, shout it out.”

NF: [Your courtroom scene] was such a memorable moment in the film.

RS: And the guy who testified how long it took to cook his grits.  Then Bruce McGill and Maury Chaykin, the three of us hung out together in the evening.  I think he [Chaykin] passed away, I’m afraid.  That broke my heart because I had done three movies with Maury, and I think I’ve done another one with Bruce. I knew Bruce around, so we hung out and had a great time while we were in Atlanta.

NF: What do you remember about shooting the scene in the courtroom?

RS: I remember it was hot down there in Georgia.  We just shot it.  It didn’t take that long.  It was just a lot of fun.

NF: What does that courtroom scene say about the accuracy of eyewitness testimony?

RS: I’m not sure.  I’m not an expert on eyewitness testimony, not being a lawyer and all.

NF: Do you have any fond memories of shooting the movie?

RS: Oh, absolutely.  Just hanging out in Atlanta for three weeks.  We had a lot of fun.  The director did just a magnificent job.  He got great performances out of everybody.

NF: How is shooting on a courtroom set different than any other set?  Is the direction any different?

RS: I don’t think so, no.  I had, like I said, just recently before that, I had done a play with Fred Gwynne.  It was a courtroom play, and the whole thing took place in a courtroom.  Fred Gwynne was the judge, and John Lithgow was the star of the play.  That was a good experience.  It was called “Salt Lake City Skyline” by Thomas Babe.  So I felt very comfortable having just been in the courtroom with Fred Gwynne as the judge.  It was a wonderful experience.  It’s done so well in the video cassette rental and people buying it.  It’s done so well for so many years.

NF: You recently did “Inherit the Wind.”  How was that?

RS: It was a wonderful experience.  The cast was very tight, and we partied every weekend at this place where they played bluegrass music, and that was a wonderful experience.  And when that closed, I said I’m going to leave New York on a good experience, and I called the movers and said, “Take me home to Virginia,” where I had a girlfriend.  We were doing the long distance thing for about three years and I said, “The heck with that!”  So now I live in Richmond, Virginia.  I lived in Washington, DC, for four years, and now I’ve been in Richmond for four years now.  I got a degree in drama from Virginia Commonwealth University here.  I always wanted to move back to Richmond.  After “Inherit the Wind” closed, I said, well I want to leave on a happy note, so I moved down here.  I’ve been thrilled to be here.

NF: How difficult is it as an actor to bring your own sense of humor to the screen?

RS: Well, if it’s funny and people laugh, it’s not that difficult.  You just do it, and it’s just funny, I don’t know.

NF: Why do you think that “My Cousin Vinny” has resonated so well with attorneys even 20 years later?

RS: I think because it’s so funny. I’ve had bigger parts in other movies, but that one is the one that people seem to like the most.  People love My Cousin Vinny.  I’ve never met anybody that didn’t like it.

NF: You’ve had roles in a number of projects over the years involving the law in some way.  “L.A. Law,” “JAG,” Fried Green Tomatoes, and most recently “Inherit the Wind.”  What is it about a legal script that draws you to the role.  Or is there anything specifically about it?

RS: My agent sends me, and I audition, and if I get it, I’m there.   I never thought about wanting to get involved with a lot of dramas, but I have been in quite a few courtrooms.  I remember being in the courtroom on “L.A. Law” for a while.  That was fun because I had known some of the people involved earlier.  Jill Eikenberry from Arena Stage in Washington, DC, many years ago.

NF: How is it like working in a stage courtroom on Broadway versus working in an actual courtroom in My Cousin Vinny?  Is there any difference there?

RS: Yeah, well nobody yells cut, and once you get up there, you’ve got to stay in character for the whole time you’re up there.  It’s just the difference between stage and film.

NF: Do you prefer live acting over film?

RS: I prefer live acting, but there are no residuals connected with live acting, so it’s a big money difference.  I prefer doing stage.  I’ve retired here to Virginia now, so I’m not working much anymore, getting my pension.  In fact, I’ve just had a call back audition for Steven Spielberg’s Abraham Lincoln he’s doing here in Virginia.  I’d love to book something with that. Just a few years ago I did The New World with Christopher Plummer here in Virginia with a story of John Smith and Pocahontas. I had a scene with Christopher Plummer in that.  My part was cut down quite a bit, but I’m still in it.

NF:  Finally, you were born Raynor Johnson but later adopted the name Raynor Scheine.  How did that name come about?

RS: Well, it had been in the back of my mind for a long time.  I was in a ninth grade science class, and we had to get up and give a report, and the teacher called on my and said, Raynor.  And my cousin Peggy, she said Raynor, Raynor Scheine.  She’s the first person I ever heard say that, and it just stuck in my mind.  And that was from ninth grade science class.  When I got to college in a few programs, different plays I was in, I experimented with the spelling of it and finally settled on what I had before I left college. My mother’s maiden name was Raynor.  Her name was Margaret Raynor.  So she named me Raynor, and I did a movie years ago with Rip Torn, and the first day on the set the director introduced.  He said, “Rip Torn – Raynor Scheine.”  Nobody cracked a smile or anything.  Everybody was very serious.  I thought it was hilarious.