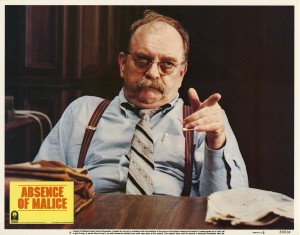 [Editor’s Note: Thirty years ago this week, on December 18, 1981, the film Absence of Malice was released to theatres.  If you’ve not seen it, go rent it immediately. Written by Kurt Luedtke and David Rayfiel, and directed by Sydney Pollack, the film starred Paul Newman and Sally Field.  But it was the cameo of Wilford Brimley in the film’s final scenes that really resonates with us all these years later.  So, we asked our fearless leader, Mills Gallivan, to share his thoughts on the film’s thirtieth anniversary, and he has done so in the piece below he calls “Abnormal Malice.”]

Even though Wilford Brimley’s portrayal of James J.Wells, U.S. Assistant Attorney General, in Absence of Malice is not a courtroom scene, it remains one of the truly great legal scenes in movie history. Brimley’s character appears late in the movie and steals the show from superstars Paul Newman and Sally Field. This Sunday marks the thirtieth anniversary of the film’s release and prompts reflection on the ongoing morality play occurring within the story

Anyone who has seen Absence of Malice could not forget Wells’ gravely southern drawl and down home demeanor when he says:

It is not just his suspenders that give Wells instant credibility, it is also his laser like focus and targeted approach to get to the bottom of a botched government investigation that has been compounded by press leaks. We are immediately drawn to Wells’ dedication to the truth; his character appeals to our natural morality and sense of fair play. This scene comes at the end of a twisting plot that takes protagonist, Michael Gallagher, played by Paul Newman, on a journey of manipulation by third parties who have destroyed his life.

Gallagher’s odyssey begins when over-zealous federal prosecutor Elliot Rosen leaks false information about Gallagher to Megan Carter, a young, naive and impetuous reporter played by Sally Field. Rosen hopes that the news story, albeit false, alleging that Gallagher is the target of an investigation into the murder of a local union official will lead him to a real suspect.  Megan seems to have no compunction about printing a story that has not been verified. Megan, like many people, does not learn from her mistakes. She continues putting out unverified stories and heaping more and more misery upon Gallagher, who quickly learns that absent actual malice, there is no legal recourse.

Realizing that he must do something, Gallagher takes Mark Twain’s advice not to start a war with the newspaper, which he knows “buys ink by the barrel.” Instead, he decides to get even; and with his own clever deceptions, orchestrates the events that culminate in the meeting with Assistant Attorney General Wells.

Near the end of the movie, Megan admits that there are no rules to direct when she should or should not print a story. When pressed by Wells to reveal the source for one of her stories she finally defaults to her own sense of right and wrong. Ultimately, she refuses to reveal additional sources in order to avoid further harm coming to others. Conversely, there are a myriad of rules relating to products liability law. We have statutes, case law, rules of civil procedure, local Federal Rules, product safety rules and regulations, and, most importantly for lawyers, the Rules of Professional Conduct.

So what has this to do with products liability and what the heck is Abnormal Malice? The gist of Abnormal Malice was best expressed by Assistant Attorney General Wells when he said to the assembled cast of guilty parties:

“Now we’ll talk all day if you want to. But, come sundown, there’s gonna be two things true that ain’t true now. One is that the United States Department of Justice is goin’ to know what in the good Christ – e’scuse me, Angie – is goin’ on around here. And the other’s I’m gonna have somebody’s ass in muh briefcase.”

This is a seminal moment for any lawyer; it is the instant when you know that you are getting the truth, and when you know “somebody’s ass” is in your briefcase. In today’s litigious society, lawyers often have to guard against abusive tactics aimed at putting our clients in precarious positions for the purpose of leveraging unreasonable settlements. We think of underhanded tactics as Abnormal Malice: attempts to direct the court and fact finders away from the truth through discovery abuses, frivolous motions, sanctions, and biased press coverage.

The current economic and political environments have created a high level of distrust for Corporate America. Americans are very unsettled due to the Great Recession, TARP Bailouts, high unemployment and Congressional gridlock. Occupy Wall Street is just one example of the level of frustration and distrust. Nevertheless, it is incumbent upon us as attorneys to represent our clients to the best of our ability in the relentless pursuit of truth. We do this through zealous but fair advocacy to achieve a just result for our clients. Knowing the rules of the road is essential to the advocate seeking judicial decisions based upon the law and the facts on the record. Most cases do not go to trial, but fair and reasonable settlements are based on a good understanding of where the truth lies and the chips will fall.

Wells sums up the procedural essence of the search for truth: “Wonderful thing, a subpoena.”

In the last 30 years, the information age has all but killed newspapers. Instead, we are deluged 24/7 by information and misinformation. Even beyond the news channels and talk radio, we are just now seeing the potential for adverse impact on juries by social media outlets such as Google, Facebook and Twitter. As lawyers we must be ever vigilant against the omnipresent threat that Abnormal Malice may improperly influence the jury. At the end of the day, our juries are the factor that most distinguishes our civil justice system as the best in the world. In fact, our civil justice system is the best tool we have for seeking the truth, and it is all that protects us from the mayhem of no rule of law.

As lawyers we have a duty to make sure that our system of civil justice is fair and accessible to all. The citizens of our country and our potential jurors must have faith that our system works. They must believe that our courts are level playing fields and that all the players are abiding by the rules and being held accountable for any Abnormal Malice. Our courts must be seen as the place where things are made right in the eyes of the law. Assistant Attorney General Wells clarifies our expectations quite nicely:

“We can’t have people go around leaking stuff for their own reasons. It ain’t legal. And worse than that, by God, it ain’t right.”