“Well, Whaddya Think? Is It Ours?”

Every area of law has its particular discovery challenges, including products liability.  Quiz: How many times have you been out at the scene of an inspection, face to face with a destroyed ________ (fill in blank here: vehicle, boat, grill, house, et cetera), and asked the question of your client/engineer, “Well, whaddya think?  Is it ours?”  The question gets even trickier with component manufacturers.  “Well, did we sell that one inch piece of ______ in the destroyed ______?” 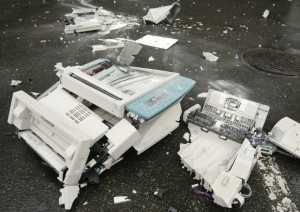 What a maddening area of practice, where you can go for months defending a case (or, for that matter, suing a manufacturer) and not even be certain the correct parties were involved.  In fact, you might actually resolve a case or two without ever having a definitive answer to that question. Ah, the perils of products cases!

That brings us to the relatively recent case of Fisher v. APP Pharmaceuticals, LLC, No. 08–CV–11047, — F. Supp. 2d —, 2011 WL 812277 (S.D.N.Y. March 1, 2011).  The case centered around the use of the drug heparin by the plaintiff’s decedent following elective heart surgery.  The plaintiff alleged that, rather than preventing blood clots as the drug was designed, the heparin actually caused the decedent’s blood to clot, which resulted in the decedent’s death of a heart attack. The personal representative of the decedent’s estate sued Hospira and John Doe Corporations asserting theories of strict liability/failure to warn, design defect, negligence, breach of warranty, negligent misrepresentation, fraud, and wrongful death.  Through two amendments to the original complaint, Plaintiff added APP Pharmaceuticals and Baxter Healthcare Corporation as defendants.

Motion to Dismiss Based on Lack of Product/Manufacturer Identification

Both APP Pharmaceuticals and Baxter moved to dismiss.  APP argued that the complaint failed to sufficiently identify the manufacturer of the heparin (the classic “it wasn’t me” defense, challenging Plaintiff to prove identity).  Baxter asserted that the complaint did not allege that Baxter’s product injured the decedent.

The Court cited the applicable pleading standards as follows:

Federal Rule of Civil Procedure 8(a)(2) requires a claim for relief to contain a “short and plain statement of the claim showing that the pleader is entitled to relief.” While the Rule 8(a)(2) pleading standard does not require “detailed factual allegations,” it does require more than “labels and conclusions” or a “formulaic recitation of the elements of a claim.” In a New York products liability action, a plaintiff must prove (1) that the defendant’s product had a defect that rendered it unreasonably dangerous at the time it left defendant’s control and (2) that the defective product supplied by the defendant caused plaintiff’s injury.

The Court then reviewed the substantive allegations of the complaint, which alleged that “Defendants,” defined as APP, Baxter, and Hospira, manufactured heparin, which was administered to the decedent and caused his injury.  Motion to dismiss denied.  Not that Plaintiff had actually, truly identified the proper manufacturer – the Court simply decided that Plaintiff’s exclamation “It was one of you, I know it!” was sufficient.  [We will refrain from expressing our opinions about this so-called standard.]
Time Barred Claims

Defendants also argued that several of the claims were time barred, based on the late addition of the Baxter and APP defendants.  Plaintiff argued, of course, that the claims related back to the original complaint.  We all remember the relation back rule:

Plaintiff argues that the [second amended complaint] relates back to the original Complaint because the John Doe Defendants named in the original Complaint served as place-holders for APP and Baxter under New York Civil Practice and Rule 203(f). Under New York law this argument is only successful if the original pleading gave notice to the newly added parties. N.Y.P.L.R. 1024 and 203(f). It is Plaintiff’s burden to establish that “(1) both claims [arise] out of the same conduct, transaction or occurrence, (2) the new defendant is united in interest with the original defendant, and (3) the new defendant knew or should have known that, but for a mistake by the plaintiff as to the identity of the proper parties, the action would have been brought against him or it as well.”

The Court held that the discovery rule did not apply in this case.  First, the decedent was told that he was suffering from heparin-induced blood clots before he died and, therefore, Plaintiff could not say that the cause of the injury remained unknown or undiscovered.  As the Court so aptly put it, “Plaintiff relies on the argument that the discovery rule should apply in cases where the plaintiff does not know who caused the injury versus what caused the injury.”  Well said.  Accordingly, several of the causes of action were dismissed as being time barred by the Court.
The discovery rule is so important to products cases, where it is common to be faced with a piece of machinery, or a house, or a car, that has been totally destroyed by the incident at issue in the case.  When that happens, the burden to determine the proper defendants that designed, manufactured, and sold the product is often no small task.   As illustrated by this case, pharmaceutical litigation can also become a maze of several manufacturers, brand and generic names, and company spin-offs.  And let’s not forget the inevitable successor liability problem. But that’s a tale for another day.
posted by Frances Zacher
Post the first comment
Tags: New York