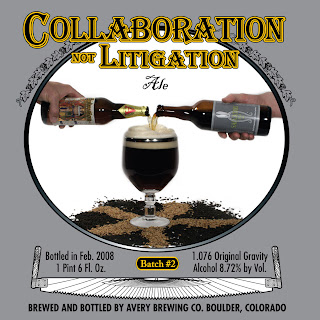 Today, Abnormal Use continues its series, “Abnormal Interviews,” in which this site will conduct interviews with law professors, practitioners and makers of legal themed popular culture. For the latest installment, we turn to Adam Avery, President and Brewmaster of the Avery Brewing Company. Why the president of a brewing company? The answer is two-fold. First, we here at Abnormal Use love to experiment (in moderation of course) with the greatest craft beers our country has to offer. Second, Avery produces a Belgian-style ale known as Collaboration Not Litigation. Once we heard the delightful name of that brew, we simply had to talk to its maker. Avery was kind enough to submit to a brief interview about the ale and the source of its name.

[ON THE ORIGIN OF THE NAME]

AVERY: I believe 2000, 2001, I met Vinnie Cilurzo from Russian River Brewing Company, and we became really good friends. . . . [W]e both had a beer called Salvation. We had mutual friends and, you know, so we were destined to meet and we hit it off. I asked, “Are you going to have a problem with [the beers with the same name]?” . . . I do remember him saying at some time we need to figure out – we should do something together about this. . . . So, the years went by, we became really close friends, and I visited him a bunch of times. When I got out there – I believe it was like 2004 – I showed up at his brew pub and pounded a bunch of beers. We started talking about this idea and his wife, Natalie, came up with the idea to call it Collaboration Not Litigation because he does a lot of “-tion” beers. He has Consecration, Damnation . . .He just has this theme going.

[ON THE BREWING OF THE ALE]

AVERY: We sat down and we blended both of our beers together out of the bottles and came up with the percentage that we thought was really good. So we said as soon as we have time we’re going to do this. We’re going to do a batch of beer and we’ll blend them and we’ll sell it. Well, these collaborations started to become more and more popular. Somebody called me from a brew magazine, and I told him the story. It goes to press. So I see it in this magazine, and I called Vinnie and say, “Hey, we’re kind of f***** here. We actually have to do this beer now, right?” So, he came here to the brewery in 2006 or 2007. He brewed a batch of his beer with us and then we brewed ours. We blended them at the right rate and then boom. I thought it was going to be a one and done. We sold a lot. People were excited about it, so we do a small batch once a year. We brew it typically in January. . . . It’s a fun beer. It’s more about like it just shows the craft industry is really about sticking together and about the rising tide floats all boats, that sort of thing.

FARR: Would you consider this a good example of alternative dispute resolution?

AVERY: I think it’s the perfect. It’s one that’s unreasonable, though, obviously. There’s still people – and I understand why people have to have trademarks. . . . If we weren’t friends, I’m sure that we would both be like, “Hey, we’ve got to settle this and figure out who’s got the name and who doesn’t.” There are a lot of names out there of beers in the industry that are shared. I don’t know if they’ve come to the same kind of friendship that I have with Vinnie, or if it’s just that we’re a little more laissez faire about trademark and trademark infringement and that sort of thing.

[PUBLIC REACTION TO THE ALE]

FARR: So what has been the public’s reaction to the beer itself and to the name of the beer?

AVERY: It’s been all positive. People really appreciate the fact that we could have sued each other but instead we kept this – our single beers both called Salvation and then we decided to do this blend. Vinnie and I would both think that the blend itself is a better beer than the other two by themselves. It’s just more complexity. There’s a weird kind of combination that goes on. There’s aromas and flavors that are new, that come together between the two beers being brought together. These flavors don’t exist in either of the two beers, but somehow when they come together they create the new nuances. It’s an excellent beer. Do people like it? If you go on Rate Beer and Beer Advocate, these rating sites, it’s rated very, very high and people enjoy it. What craft is to most people is a bunch of home brewers like myself who turn their hobby into a profession, who are not strictly businessmen. They’re actually about passion for making beer and hopefully passion for everybody else’s business as we try to grab more of the market share because we’re fighting over scraps. We’re at 5 percent nationally, so we’ve got a long way to go. If we do that together, it’s going to be a lot easier. This beer is kind of an epitome of that philosophy and thought that I think that most craft brewers have.

[REACTION FROM THE LEGAL COMMUNITY]

AVERY: I get a lot of calls. I get a lot of emails from litigators. They’re like, “We’ve got to pick up ten cases of this for our company party.” I direct them to wherever they are in the country. Hopefully, there’s a retailer near them that’s got some beers. So, yeah, I get comments all the time about it. I’ve never had one say, “You guys are crazy, you should be fighting. ” All the attorneys are like, “This is unbelievable, I can’t believe you guys actually did this. “
[BEER – THE WORLD’S PROBLEM SOLVING AGENT?]
FARR: In your experience, how can beer be a catalyst to solving problems?

AVERY: I think Homer Simpson said it best: “Beer, the cause of all the world’s problems and the solution.” I mean beer is that thing that almost everybody loves. Most people that say they don’t like beer, they think of beer as Bud, Miller, Coors. They think of something that’s fairly flavorless and just carbonated. So, once we get everybody on board with how much flavor can come out of a craft beer, especially something like Collaboration Not Litigation. Everybody drinks a beer together and it just seems like an easy way to – it definitely helps to solve problems.

BIOGRAPHY: Adam Avery is the President and Brewmaster of the Avery Brewing Company. Located in Boulder, Colorado, the Avery Brewing Company has a line-up of more than twenty uniquely named beers which blend “Old World tradition and expertise with ingenuity, creativity and boldness.” You can follow the company on Twitter here.
posted by Nick Farr
Comments (3)
Tags: Abnormal Interviews, Food