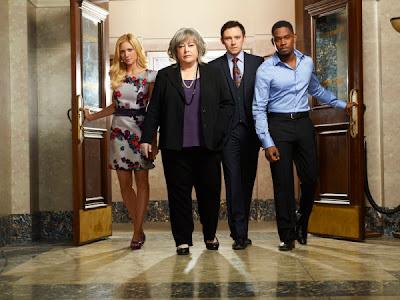 Television showrunner David E. Kelley (“Ally McBeal,” “The Practice,” “Boston Legal”) has a new legal drama, “Harry’s Law,” starring Kathy Bates, which premieres tonight on NBC at 10/9 Central. We here at Abnormal Use were able to pull some strings with our many Hollywood connections and score an advance screener of the series’ first two episodes, and we liked what we saw (especially since it takes many, many cues from Kelley’s recently departed “Boston Legal”).

Before reviewing the pilot episode, we must disclose that we have always been fans of Kelley’s oeuvre. Even when we were slumbering through psychology and biochemistry classes without even the slightest thought of attending law school, we rather enjoyed watching Ally McBeal dealing with the stress of working in a law firm with her childhood boyfriend. Once we made that fateful and immutable decision to attend law school, Denny Crane and Alan Shore in “Boston Legal” had us looking forward to those days when we too would be sharing cigars on the office balcony after a long day of legal shenanigans. Given our love for a good David E. Kelley legal drama, we were thrilled to obtain an advance screener of “Harry’s Law.“

So much for objectivity. 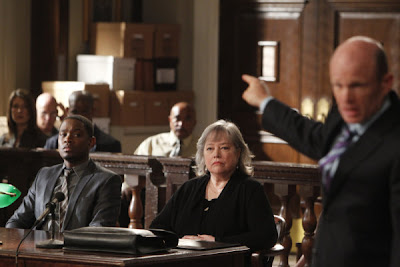 Written by Kelley and directed by Bill D’Elia, the pilot was a fun bit of television. With only minor, minor spoilers, the basic premise is as follows: Harriet Korn, a highly successful attorney, is fired from her plush Cincinnati mega-firm after expressing her disgust and boredom with the everyday monotony of her patent work. (Possibly Kelley’s most realistic premise to date). Following a series of miraculous events, Korn establishes “Harriet’s Law and Fine Shoes” in an area of town not likely to be highlighted by the chamber of commerce. (Harriet’s firm also peddles, at the insistence of Korn’s legal assistant, Jenna Backstrom (Brittany Snow), a fine assortment of Prada and Jimmy Choo’s footwear left over from the previous tenant, who apparently abandoned a sizable inventory.). Along with Backstrom, Korn hires Adam Branch (Nathan Corddry), a young, over-the-top patent lawyer, who joins the firm after inadvertently striking Korn with his Mercedes, and Malcolm Davies (Aml Ameen), an aspiring college-student who literally falls upon Korn during a suicide leap following his third drug charge. “Harriet’s Law and Fine Shoes” begins its sojourn into criminal defense with Korn representing Davies on his drug charge and Branch representing Damien Winslow (Johnny Ray Gill) after Winslow’s “protective services” result in a bullet in the leg of an alleged armed robber. 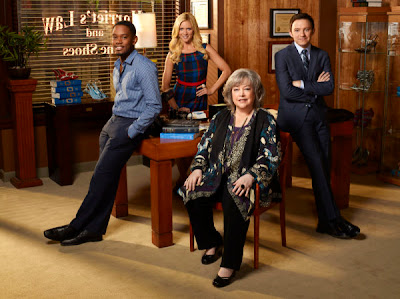 As attorneys, it is rather easy to identify all the inaccuracies of “Harry’s Law.” For starters, the sale of expensive footwear out of a law practice must surely violate ethical principle (although we can’t recall any specific examples from the MPRE). However, if such a thing is ethically permissible, Kelley may have solved an issue for firms seeking to escape the economic conundrum. Aside from the ethical pickle of shoe sales, Kelley paints an idealized picture of the practice of law – not as it actually exists. Legal rules are often cast aside in order to turn cases into a platform for social issues rather than a means to resolve a suit. During the course of the Davies’ trial, Korn opines on the benefits of legalizing drugs. Korn offers her opinion, not during the scope of an objection, but rather as an open monologue in the midst of the prosecutor’s (Paul McCrane) cross-examination of her client. Following this soliloquy, she then argues for jury nullification during her closing statement. In so doing, she urges the members of the jury to offer her just one not-guilty vote despite her lack of any legal defense. Korn claims there is “no justice in the law,” but we here at Abnormal Use believe there is more to law than winning and losing.

That said, Kelley succeeds in filling the void left by the absence of “Boston Legal” from the airwaves. “Harry’s Law” provides a new cast of characters carrying-on in the footsteps of Legal‘s Shore and Crane. As Korn, Bates delivers her best performance since the car-smashing, “I’m older and have more insurance” days of 1991’s Fried Green Tomatoes. (By the way, wouldn’t you have hated to be the adjuster who informed her that she wasn’t covered due to her policy’s intentional acts exclusion?). As Branch, Corddry dazzles, reminiscent of the infamous Alan Shore, using an arraignment hearing as a soapbox to highlight the neglect of inner-city populations. (Just wait until he stands up to the egotistical, television ad plaintiff’s lawyer in next week’s “Heat of Passion” episode). 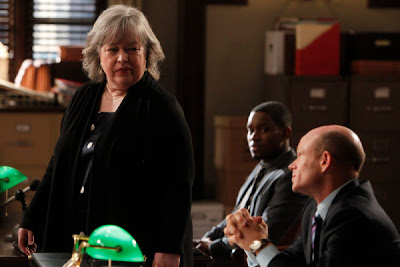 Kelley’s shows work because of his ability to create quirky, non-stereotypical lawyers to highlight contemporary issues using litigation as an effective backdrop. Though lawyers may recoil at some of the perceived inaccuracies, non-lawyers will find that it makes for great television. “Harry’s Law” tiptoes that fine line between what the law is (at least according to Kelley) and what the law should be (again, according to Kelley). With such an approach, it’s easy to draw viewers into the alleged war between social and legal justice (although favorable depictions of large corporate defendants are unlikely given his track record).

“Harry’s Law” does not preach that the practice is nothing but a cutthroat all-or-nothing business at the expense of social justice, any more than “Grey’s Anatomy” purports that every nurse or surgical resident beds another while patients await in the next room. (Seriously, that much intra-hospital action can’t seriously be going on can it?). While it is not a realistic portrayal of the courtroom, “Harry’s Law” is a witty, thought-provoking indulgence into the realm of social justice.