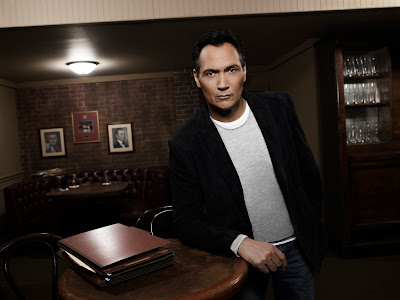 Apparently, and unfortunately, NBC is determined to reboot its fateful 1980s series, “Knight Rider,” in the form of a new legal drama. You heard me right. Today, we here at the legal blog Abnormal Use review NBC’s new television show“Outlaw,” a heavy handed new lawyer show which premiered last night. As a series, it takes the aforementioned “Knight Rider” formula (unfortunately the 2008 version) and attempts to apply it to a would-be legal series. Sigh.

Before I lose the readership in this comparison, allow me some introduction and factual development. “Outlaw” is one of NBC’s attempts to return to scripted programming after “The Jay Leno Show” debacle. I was a bit skeptical of the premise when I read that Jimmy Smits portrays “former Supreme Court Justice Cyrus Garza, a playboy and a gambler who always adhered to a strict interpretation of the law until he realized the system he believed in was flawed.” But there’s always hope, however naive, that NBC will come up with a decent legal drama before the “Law and Order’ concept becomes too worn.

Here’s the plot summary: Cyrus Garza is “arguably the most conservative justice” on the Supreme Court. Cyrus has a problem because he feels like he has let down his dear old dad, a recently deceased lawyer-activist who championed liberal causes. After a one night stand with an twenty-something ACLU member, Cyrus realizes that conservatism is innately wrong, and before resigning his appointment, he grants a new trial to a convicted cop killer. Cyrus joins a law firm (at which Jan from “The Office” is the managing partner) and assembles a team who will fly all over the country righting wrongs perpetrated by our justice system. Cyrus then becomes the head lawyer on the defense team of the cop killer. His team discovers evidence not presented at trial establishing that the dead cop’s husband actually killed the cop. I will affirm that I in no way have embellished the plot. If this were not enough, Cyrus owes his bookie $250,000 and will have to pay at some point during the next three months.

Here’s the deal. As you can tell from my summary, the premise of the show is absurd. But as we’ve noted before, real life law practice can be pretty boring, so I’m not asking the show to be real. Legal Knight Rider though, is a bit much. The dialogue beats you over the head with the idea that Cyrus is sick of preserving a justice system at the expense of the innocent. He actually says things like “I’m hurting the people that I should be protecting.” By the end of the show, after Cyrus and company free the innocent man, it’s clear that “one man can make a difference.” The absurdity of the premise will likely mean the end of the show. Cyrus had his epiphany in episode one. He is now a crusader, a man of great moral fiber. What is left to do now? There’s no internal conflict in the protagonist. Trying to give Cyrus instant depth works against the longevity of Outlaw. And it promotes the same hackneyed legal plots. Moreover, there is no sense that there will ever be any real characters other than Cyrus. He has three lawyers and a private investigator that work under him, but the characters all seem a bit fungible. It’s possible they were cardboard cutouts, or to be less harsh, merely extensions of Cyrus himself, since even this champion of the people can’t be in two places at once or carry on an extended dialogue with himself. I would not be surprised if, at some point in the future, we discover that Cyrus has an evil twin, allowing Cyrus to carry on conversations with evil Cyrus. This would ensure that we all know that Jimmy Smits is the main character on the show.

From a legal standpoint, do you think there is anything questionable about the judge who essentially overturns a murder verdict becoming a lawyer for the criminal defendant? The show also asserts a stale take on jurisprudence, namely, that the court is not really an actor in our legal system. You kind of get the feeling that, without Cyrus preaching about the real meaning of justice, the judiciary would sit around for the next few years, throwing their hands in the air, not knowing what to do about all the terribly conservative legal precedent, and let a lot of innocent prisoners be executed. Thankfully, there is the Outlaw, who I presume to be Cyrus. Now judges everywhere will be able to take some steps to move our system forward. Yet again, one man can make a difference. The passivity attributed to the judiciary is too much. It takes the form of powerlessness rather than stare decisis. I don’t know anyone who thinks that the judiciary is powerless. But apparently Cyrus does, because after all, he quit his lifetime appointment on the world’s most powerful court to dispense some real justice.

That being said, this show isn’t nearly as bad as the freshman lawyer drama, “The Deep End.” To be reminded of why that show lasted 5 episodes or so, please revisit our initial review of that show here. But “Outlaw” isn’t really that good either. It’s obvious that NBC is depending on Smits‘ star power to carry the show. In fact Smits‘ bio on the cast page recites the phrase “critically acclaimed” about Smits or his prior work six times. Notice I said prior work. Will Smits enjoy the same success as had by Joe Mantegna, who spurred CBS’s 2002 Supreme Court drama, “First Monday” to an amazing 4-month, 13-episode run? Only time will tell. Meanwhile, I hope the writer’s will immediately begin to add something to this so-far bland show.