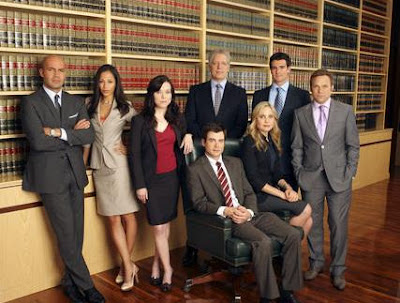 Above: A promotional still from the new ABC series, “The Deep End.”

In an attempt to keep this blog refreshing, the powers that be have consented to a minimal amount of frivolous Friday posts exploring the depiction of the legal profession in popular culture. Today’s post reviews last night’s series premiere of The Deep End, a legal comedy/drama on ABC shown from the perspective of five first-year associates at a BigLaw Los Angeles law firm, Sterling, Huddle, Oppenheim & Craft, not to be confused with Sagman, Bennett, Robbins, Oppenheim & Taft, a firm with a much more esteemed place in TV history.

It’s easy to attack The Deep End for its utter lack of realism. No one would watch a show about associates sitting in their offices 11-12 hours a day staring at documents and holding Dictaphones. So don’t expect realism. Really, don’t. A bitter custody dispute between a mother-in-law and daughter-in-law over the grandson/son ends with the litigants holding hands. (How many bitter family law cases do BigLaw first year associates handle? Don’t ask.).

Knowing that critics had somewhat panned the series prior to Thursday, I debated on the method of review. I considered writing and posting a predictive review prior to my actually viewing the premiere and then commenting on the accuracy of the prognostication, highlighting my sardonic wit whilst condemning Hollywood’s inability to write interesting programming. However, in an effort to find the truth, I settled on actually watching the show first. However, the former approach would have been perfectly adequate under the circumstances.

From a legal perspective, the depicted firm has several strange conflicts of interests. Cliff Huddle (Billy Zane), the Managing Partner, schemes against his firm’s own pro bono client, while new associate Beth Branford (Leah Pipes) fails to protect an elderly, vulnerable corporate CEO (although it wasn’t especially clear who the actual client was or should be – the corporation itself or the officer in his individual capacity.). There is a seemingly ex parte meeting with a judge. Another first year associate, Liam Priory, (Ben Lawson) almost breaks an ethical rule by having sex with a client, but thankfully, any sexual activity that may or may not have occurred took place before any retention agreement was signed. For a group of lawyers who purport to work 24/7, they seem to find enough to time to gather together to lament the fact they work 24/7.

Moreover, the show is simply predictable and boring, flaws which are not confined to legal dramas. Plots and characters are far from compelling, and cliches abound. The idealist associate wins in the end. (Of course). The spineless associate suddenly shows some backbone, earning respect for suddenly showing courage. The privileged associate fails to stand up to her overbearing father, provider of the privileged status. In addition, the writers offer awkward exchanges of dialogue in an attempt to capture the essence of first-year lawyering, e.g., (“Q: Are we supposed to love this job or hate it? A: Both.”). (This dialogue is said with excited smiles). I suppose that some of the shaky camera style was supposed to give us the feeling of a first year as well, along with first year associate Dylan Hewitt’s (Matt Long) constant hugging of his briefcase when things get tough. Yes, you are scared about failing. We get it. What I don’t get is why these first-year associates even have jobs. Who is this firm’s recruiting coordinator, who, I should note is conveniently absent from the pilot episode, perhaps due to the poor hiring choices?

My favorite part was about 42 minutes in, when it appears that the law firm misspells its own name in its signage: “Oppenhiem” on the sign v. “Oppenheim” on the ABC website. Good job, post production. At least the suboptimal effort was consistent on all fronts.