The $20 Million Bucket of Chicken

According to reports, a New York woman, Anna Wurtzburger, has filed suit against Kentucky Fried Chicken in which she seeks $20 million from the fast food chicken giant. If you are like us, you must be thinking that if Wurtzburger is seeking enough money to buy a French chateau, she must have been severely injured by some atrocious KFC conduct. Well, not exactly. In fact, Wutzburger hasn’t been “injured” at all. KFC’s atrocious conduct? Allegedly skimping on a bucket of chicken.

Wutzburger purchased a $20 “Fill-Up” bucket of chicken from a KFC in Hopewell Junction, New York. When she got home, she opened up the bucket and discovered it was only filled about half way. A half-filled bucket stunned Wutzburger because she was expecting “an overflowing bucket of chicken” as shown in KFC advertisements (depicted below). 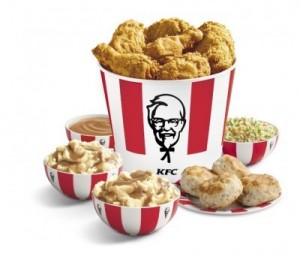 Wutzburger then contacted KFC to discuss the dispute wherein KFC explained that the chicken was depicted as overflowing the bucket in the advertisement so that viewers could see the product. Wutzburger wasn’t buying it. She alleges that KFC was “intentionally misleading and deceiving the public when it advertised an overflowing bucket of chicken on television but knew that they would only sell 8 pieces of chicken to the public.” KFC has denied the allegations. In a statement to Fortune, a KFC spokesperson stated:

To be fair, Wutzburger claims the pieces were small.

We here at Abnormal Use certainly understand Wutzburger’s frustration. Commercials and print media always seem to depict food in its best possible light when, in reality, it always comes out looking somewhat less than ideal. Nonetheless, even assuming this is a matter of false and misleading advertising, what are the real damages? Wutzburger paid for 8 pieces of chicken and received 8 pieces of chicken. She voiced her frustration to KFC, and they offered her a coupon as a means of reimbursing her for the chicken. But, that was apparently not enough.

Truth be told, Wutzburger has probably lost her case before it even began. She violated the Chicken Rule. By demanding $20 million in her complaint, she has damaged her credibility and tarnished the views of people who otherwise may have had some empathy for her claim (including us).