Flame Gun Warning: You Be The Judge

From time to time, we here at Abnormal Use chance across quirky products (or quirky warnings) and offer our comments.  Well, we’ve seen some doozies, but this one may take the cake. The Retroist found a 1972 advertisement a Flame Gun!  Yes, you read that right.  The full post can be found here, but we simply can’t resist providing the actual image of the flame gun itself: 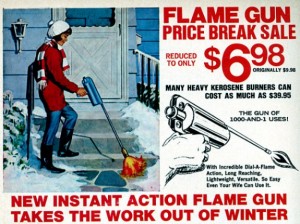 Now this thing looks useful!  After all, it’s “the gun of 1000-and-1 uses!”  Perfect for, um, well, I guess when your gas stove won’t light, this could do the trick! Apparently, it’s so easy to use that “Even your wife can use it.”  Wasn’t 1972 a little late for those kinds of statements? Actually, the helpful ad suggests a few other uses, including destroying insects, anthills, and old wasp nests from a “safe distance.”  But the real kicker, in our opinion, is that this unit is advertised as being of use BOTH indoors and outdoors.  Are we the only ones who think this is a BAD IDEA? The copyright on the bottom of the helpful ad shows that the project is registered to Bevis Industries, which apparently no longer exists.  We can’t imagine why! 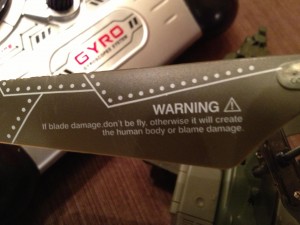 This picture was forwarded to me by a friend after he purchased a remote control helicopter.  Maybe Santa brought you one of these in your stocking as well.  In case you can’t see the warning printed on the blade, it reads as follows:

WARNING.  If blade damage, don’t be fly.  otherwise it will create the human body or blame damage.

Clearly, this warning label has some problems, but we thought that it would be a great time to review warnings standards, and discuss specifically what the drafter could have done better (at least under South Carolina law). First, when is a warning required in the first place?  Basically, if it is foreseeable that users might need to be warned about the precise risk involved with using a product, it will be required.  See, e.g. Madden v. Cox, 284 S.C. 574, 328 S.E.2d 108 (Ct. App. 1995).   Warnings are not required when the danger is open and obvious to the user.  Moore v. Barony House Rest., LLC, 382 S.C. 35, 41, 674 S.E.2d 500, 504 (Ct. App. 2009).  The issue of foreseeability has been the subject of litigation as well–how broadly should a manufacturer foresee that the product will be used, either appropriately (intended use) or inappropriately (non-intended use)?  One case provides a good guide:

“Intended use” is but a convenient adaptation of the basic test of “reasonable foreseeability” framed to more specifically fit the factual situations out of which arise questions of a manufacturer’s liability for negligence. “Intended use” is not an inflexible formula to be apodictically applied to every case. Normally a seller or manufacturer is entitled to anticipate that  the product he deals in will be used only for the purposes for which it is manufactured and sold; thus he is expected to reasonably foresee only injuries arising in the course of such use.

Gardner v. Q. H. S., Inc., 448 F.2d 238, 242-43 (4th Cir. 1971).
So, in the context of our remote control helicopter, we must determine whether or not there is a precise risk involved with “using” the helicopter.  It seems fairly obvious to me that in order to fly, the helicopter must rotate its blades fast enough to allow the device to take flight, and putting yourself in the way of those rotating blades could result in an injury.  But, for the sake of argument, let’s assume that a warning is necessary, and that not all risks are open and obvious.
So, the next inquiry, is what should the warning say?  What would constitute an “adequate warning” for this helicopter?  Again, case law is relatively clear on this subject:

The warning must be appropriate; implicit in the duty to warn is the duty to warn with a degree of intensity that would cause a reasonable man to exercise for his own safety the caution commensurate with the potential danger. From this it follows that the likelihood of an accident taking place and the seriousness of the consequences are always pertinent matters to be considered with respect to the duty to provide a sufficient warning label, and that there is a particular need for a sufficient warning where there is a representation that the product in question is not dangerous.

In the case of our remote control helicopter, I think it’s a safe bet to say that there would be enough evidence to get to a jury on the issue of the adequacy of this warning.  If anyone has any arguments, please let me know.

Some other warning-related issues to consider are:  1) who should receive the warning, and 2) is preemption involved?  Both of these questions are easily illustrated by prescription drugs.  As we’ve blogged about before, it is the physician–not the patient–who is deemed to be the “recipient” of the warnings associated with medication.  The physician is expected to pass along any warnings to the consumer or patient.  Prescription drug warnings are also heavily regulated by the FDA, and so any case involving the adequacy of warnings will likely include a preemption element or defense.
One final note.  Don’t allow yourself to become too distracted on the issue of warnings in any one case, because independent of the warning, the plaintiff must also still prove causation.  Even if the warning was totally absent, there might still be facts in your case that render the warnings issue a red herring.
posted by Frances Zacher
Post the first comment
Tags: Warnings

The Wackiest Warning Labels of 2012

In the summer of last year, we blogged about the Center for America’s Wacky Warning Labels Contest – a contest which, in the words of the Center’s own words, “reveal[s] the excesses of civil liberty.”  These are labels that assume mankind has no common sense.

Well, 2012 was no different for the Center for America. Once again, its loyal devotees submitted warning labels for the contest, and the “wackiest” have now been chosen.  Here is the winner of the 2012 contest:

Well, I suppose I must remove my globe from my car’s dashboard!  A complete list of the Wacky Warning Labels contest is here.

In other navigation news, several news outlets have reported that Australian police are warning users of Apple Maps, a feature of the newest iPhone, that following its directions can be life-threatening.  Really?  Yes.  Apparently, people using the feature to find Midura, Australia are directed not to the small town, but 40 miles away to a remote part of Murray-Sunset National Park in the Australian Outback.  This is no small sort of error.   Temperatures can reach more than 100 degrees, and there is no water source in the park.  Several travelers were rescued by the police.  On the bright side, it appears that the iPhone gets great cell service in the Outback.

Perhaps while Apple is scrambling to fix its widely criticized maps application, we can come up with an adequate warning to help in the case of an unanticipated detour:  “Warning:  Use of This Maps Application Can Be Life Threatening.” “Objects on Map are Further Than They Appear.”  “Make Sure to Carry Plenty of Food and Water When Using Navigation System.” “Beware of Crocodiles.”

Maybe we’ll see some of those in next year’s contest. 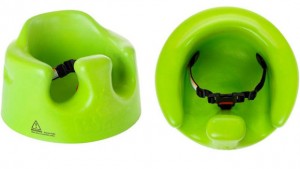 My two-year-old son had an ear infection last week and, like a good mother, I took him to the pediatrician, who prescribed a liquid antibiotic with a name that, despite my seven years of higher education, I cannot pronounce.  Waiting for him to finish his supper that night, I began to read the fine print.  Apparently, in addition to ear infections, the antibiotic can be used to help treat an STD that I also cannot pronounce, and had to look up on Google.  What can I say? You learn something new every day.  I learned that I might never again read the insert on a prescription drug.

This case is nothing special: an extremely short decision outlining the reasons that the defendant, drug maker Genentech, was granted summary judgment against a pro se plaintiff who alleged that Genentech’s eye drug, Lucentis, exacerbated the plaintiff’s glaucoma and sight loss.  Basically, the plaintiff failed to name an expert, despite several deadline extensions to do so.

In this unremarkable decision, however, is a reminder about the law regarding warnings and prescription drugs:  “Prescription drug manufacturers have a duty to warn the patient’s doctor of the dangers involved with their product rather than warn the patient directly.” (emphasis added).  The decision also cites the rule of thumb regarding experts in drug cases like this one – “in cases of pharmaceuticals, since the warning is directed to physicians, only they or someone with similar expertise concerning pharmaceuticals would be qualified to determine whether or not the warning was adequate” (internal quotations and citations omitted).

Well, there you go.