Move Over Bottled Water, and Make Way for Canned Air 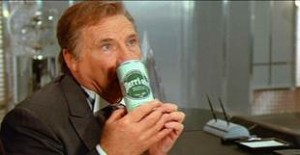 In what could be the saddest development of the last century, HuffPost reports that a Chinese billionaire has determined that there is now a market for soda cans containing air.  Although I am not the first to point it out, this means that Spaceballs has officially become reality – life imitating art in the most depressing way possible.  Those who scoff at the idea of air-in-a-can and think that no one would ever buy it should keep their laughter to themselves.  This canned atmosphere raked in about $800 in sales during its first day on the market, which is no small feat for a product priced at roughly 80 cents per can.  In other words, it is virtually flying off the shelves in the country that lays claim to some of the world’s most polluted cities.

On the bright side, the idea man behind the venture is donating all proceeds to charity.  He hopes that the buzz surrounding his product will spotlight the issue of pollution in China.

So what does this mean?  Should those who enjoy breathing avoid traveling to China?  Should we combine our Earth, Fire, Wind, Water, and Heart to summon Captain Planet?  What’s the difference between canned air and an empty, sealed can?   We here at Abnormal Use do not have the answers.  However, we do know that we who are fortunate enough to live an area where it does not cost to respire should take a deep breath while it’s free.

Feel free to speculate in the comments section about what we can expect in the way of canned air product litigation.

According to The New York Times, Baidua, a popular Chinese search engine, recently scored a simultaneous victory for both censorship of speech and freedom of speech.  A federal district court in New York recently dismissed a lawsuit that sought to punish Baidu for censorship that limits certain pro-democracy search results.  In dismissing the lawsuit, the judge ruled that Baidu itself maintains a First Amendment right to censor pro-democracy webpages from from its own search results. Baidu is the biggest search engine in China with more than 50 percent of the  market share.  However, the Chinese company is required to comply with the nation’s strict regulations over Internet content. As you may recall, in 2010,  Google decided to shutdown its search engine operations in China following ongoing disputes with the nation’s censorship rules. This lawsuit was filed in 2011 and claimed that Baidu was violating United States laws on free speech because its search results had been censoring pro-democracy works for those accessing the site from New York.  The lawsuit sought a mere $16 million in damages for the purported free speech violations.  However, the district court ultimately ruled against the plaintiff and held that requiring Baidu to include pro-democracy webpages in its search results would actually be a violation of the First Amendment Funny how that works, eh? The court compared Baidu’s filtering of search results to a newspaper’s right to exercise “editorial control” over the contents that it publishes. Baidu has simply created a search engine producing results that favor certain types of political speech. The court’s order states that “[t]he First Amendment protects Baidu’s right to advocate for systems of government other than democracy . . . just as surely as it protects Plaintiffs’ rights to advocate for democracy.”
posted by Rob Green
Post the first comment
Tags: China, New York

The Chinese automotive industry (both domestic and import) has grown exponentially in recent years.  Reportedly, some of the consumers driving this growth have complained of defects in the vehicles they purchased, and apparently, some of them feel that their complaints have been ignored. This problem received attention in a YouTube video featuring several men destroying an Italian sports car with sledge hammers.  According to the video’s caption, a Chinese man purchased a Lamborghini Gallardo, and much to his dismay, the engine would not start.  He believed that his attempts to reach out to the manufacturer and Chinese affiliates were ignored, so naturally, he decided to make a statement by paying a group of men to destroy his vehicle.  The aggrieved Lamborghini purchaser succeeded in making a statement, as his destruction video has received over 722,000 hits on YouTube.

In the United States, consumers have legal redress if the vehicle they purchase turns out to be defective.  Most states have a “lemon law” which protects consumers in the event that they have purchased a defective vehicle, or a “lemon.”  For example, South Carolina has legislation in place which  requires the manufacturer of a new vehicle to conform to all express warranties within the first twelve months of purchase or first 12,000 miles of operation, whichever occurs first (S.C. Code Ann. § 56-28-30).  If the vehicle is nonconforming as defined by the statute, the manufacturer is required to make necessary repairs if the consumer provides requisite notice to the manufacturer.  Alabama’s lemon law protects consumers from certain defects in specified vehicles for two years or 24,000 miles, provided that various notice and other requirements are met.  (Code of Alabama §§8-20A-1 through 8-20A-6).  Until recently, China had no such law, so Chinese consumers were stuck with the costs of repair of a defective vehicle, or the cost of a sledgehammer mob if they decided to go that route.