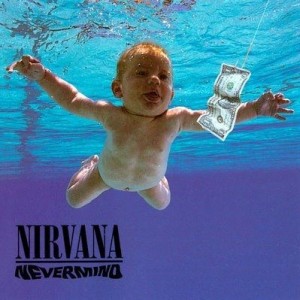 As lawyers, we here at Abnormal Use can identify many things that have shaped our careers. Whether it be a law professor, a client, or a trial, the way we practice law is a product of our past experiences. While many of those past events are legal in nature, life experiences also play a critical role. Contrary to the punchlines of many legal jokes, we are humans first and foremost, and we were molded as individuals long before we embarked on our legal odyssey.

Looking back at my formative years, September 24, 1991 may be the date that shaped me as a person more so than any other (apart from my marriage and the birth of my children, of course). On that date, 25 years ago this past Saturday, Nirvana released its second studio album, Nevermind. The album rescued rock music from its most mundane slump in its history and brought alternative rock to the mainstream. Aside from its revolutionary effect on music, the album’s ramifications on a generation of youth is its greatest achievement.

Personally, I was a mere 10 years old when Nevermind was released; I was just beginning to develop my own music preferences. I had just acquired DJ Jazzy Jeff and the Fresh Prince’s Homebase, thinking it would go perfectly with the only other album in my collection, MC Hammer’s Please Hammer, Don’t Hurt ‘Em. While my choice in music may seem laughable today, at the time, it was not. All the “cool” kids were listening to terrible rap music, so I would, too. I was the well-behaved quiet kid who did well in school and desperately aimed to fit in.  So I bought those albums and listened to them alone in my room after school, memorizing the lyrics so I could be in the conversation with the cool kids.

The release of Nevermind, however, brought an end to that vicious cycle.

One afternoon, I was flipping through the channels on the television and came across the music video for “Smells Like Teen Spirit,” Nirvana’s first single from Nevermind. Admittedly, I could not understand a single lyric from the song, but somehow, it spoke to me. Kurt Cobain’s muffled screaming over the sounds of the guitar and drums quenched my musical thirst far more than the beats of ’90’s rap ever had before. I heard this enchanting sound and learned that it was coming from guys who clearly weren’t trying to “fit in” with the times. There was no glam. Just guys wearing ratty clothes with unkempt hair playing music in a dusty old gymnasium. For me, that redefined what I thought was cool.

Shortly thereafter, I got my hands on Nevermind and listened to it on a continuous loop. While I didn’t grasp the full meaning of many of the lyrics at the age of 10, it didn’t matter. Nirvana was my music. My sound. My way of looking at the world. For whatever reason, listening to Nirvana and watching the video for “Smells Like Teen Spirit” was the affirmation I needed that I didn’t have to follow suit with the other kids (however, they, too, eventually ditched “U Can’t Touch This” in favor of the Seattle grunge scene). I didn’t try to emulate Nirvana. I didn’t have to wear ratty clothes and not comb my hair. I was still the well-behaved kid who got good grades, but I was me – not somebody else. Nirvana taught me that is okay.

Twenty-five years later, I still take with me those life lessons I derived from my first exposure to that “Smells Like Teen Spirit” music video. I have my own style. My own way of doing things. My own way of practicing law. And, I am happy with that.