For those who live in a windowless basement with no access to the Internet or television, we are pleased to be the first to inform you that Erin Andrews, well-known sportscaster, model, and reality show co-host, is currently involved in a trial. 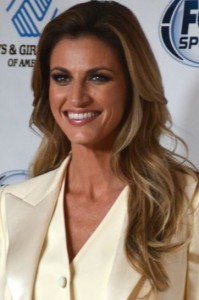 Andrews filed suit (see original complaint here) against Marriott International, Inc. and various other defendants in the Circuit Court of Cook County, Illinois in 2010, alleging that the Defendants were all involved in a series of events which ultimately led to Defendant Michael Barrett booking a Nashville Marriott hotel room next to Andrews’ room, surreptitiously obtaining video footage of her nude through a peephole, and posting the video on the Internet. On December 1, 2011, the lawsuit was apparently re-filed in Davidson County, Tennessee, and the Tennessee complaint included a damages demand of $10 million. On October 16, 2015, the Complaint was amended to include a damages demand of $65 million.

The following is a recap of the trial to date.

Trial began on February 22, 2016 in the Davidson County Courthouse in Nashville with Judge Hamilton Gayden presiding. Twelve jurors were selected, which included nine women and five men. The judge originally barred media from the courtroom, but the judge reconsidered shortly thereafter and allowed media in the courtroom.

Andrews attorney, Randall Kinard, delivered his opening statement, telling the jury that: Andrews suffered humiliation when the peephole videos were posted in 2009. Kinnard pointed the finger at hotel staff for telling Barrett which room Andrews was staying in, and subsequently allowing Barrett to book a room next door to Andrews. Marriott’s attorney, Marc Dedman, told the jury that the stalker was solely to blame for the video and subsequent posting, and that Andrews actually benefited from the incident, because her career thrived thereafter due to the ensuing publicity. The first witnesses were Marriott employees who testified that it was Marriott’s policy not to give out room numbers. However, a call center employee apparently noted that Barrett requested a room next to Andrews, and another employee confirmed that it would not be unusual to accommodate a guest’s request to stay next to another guest.

On the third day of trial, Andrews’ standard of care expert testified that Marriott violated the relevant standard of care by identifying Andrews as a guest in the hotel, by not ensuring that guest room door peepholes were secure, and by not providing adequate security. Steve Andrews, Andrews’ father, also testified regarding the emotional damage that Andrews experienced as a result of the incident. The day ended with a former front desk supervisor at the hotel testifying that she was never given a guest privacy training manual, but that she was told not to give out guest room numbers.

On day 4, the jury saw the 4.5 minutes of footage.  A computer expert testified that his Internet research suggested that the video had been viewed by more than 16 million people between July of 2009 and January of 2016. Andrews’ therapist provided testimony regarding the emotional damage experienced by Andrews.

Barrett testified by video, explaining the process by which he was able to obtain a room next to Andrews.  Barrett also apparently filmed approximately nine other women through peepholes. Andrews took the stand herself on Day 5, testifying about the anxiety that she has experienced, the fear, and the “jeers” she receives at games regarding the video.

Stephen Barth, Marriott’s standard of care expert, testified that Marriott did not violate any policies or procedures as alleged.  A former manager of the hotel denied that any rules or procedures were violated, and that the hotel had passed a secret inspection with flying colors three months prior to the incident.  A psychologist who evaluated Andrews testified that she indeed suffered from mild PTSD, but that the symptoms would resolve with treatment. The front desk worker who checked Barrett in on the day of the incident did not recall details, but she testified that she would have checked with Andrews before placing another guest in the room next to Andrews.

Closing arguments will be made on March 9, 2016, and the jury will get the case shortly thereafter.