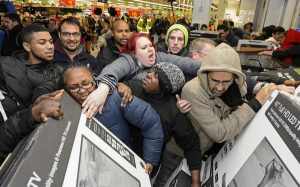 Perhaps the best Black Friday-related lawsuit ever filed was initiated by famed frivolous lawsuit filer Jonathan Lee Riches, who filed a “pro se complaint under 42 U.S.C. § 1983 against ‘Thanksgiving, Pilgrims, Mayflower Movers, Pilgrim Pride, Turkey Hill, Black Friday, Corn on the Cob, Cleveland Indians'” alleging that ““defendants are responsible for higher traffic, that they are ‘conspiring with the oil companies to drive up gas prices,’ and that Thanksgiving is ‘responsible for his mistreatment.’” Riches v. Thanksgiving, No. C 07-6108 MJJ (PR), 2007 WL 4591385, at *1 (N.D. Cal. Dec. 28, 2007).

We hope that everyone enjoyed their Thanksgiving holiday and that no one finds themselves on the defendant side of the “v” in a Black Friday-related civil action.